If I had to make a choice among Amtrak’s long-distance trains, it would be the Empire Builder, which operates daily between Chicago and either Seattle, Washington, or Portland, Oregon.

I’ve probably taken this two-night trip eight or nine times, maybe more. I like it a lot because the scenery is so varied. Out of Chicago, the train heads north to Milwaukee, then angles more to the west, cutting across Wisconsin and Minnesota, through some of the most fertile farmlands anywhere in the U.S. 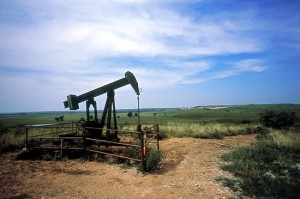 You’re in North Dakota when you wake up the next morning, heading due west through vast fields of grain. The Montana state line comes about lunchtime and this truly is “Big Sky” country – rolling plains stretching to the horizon, sometimes sectioned into wheat fields, sometimes home to grazing cattle. Every so often, there’s an oil well with the derrick methodically dipping up-down, up-down. 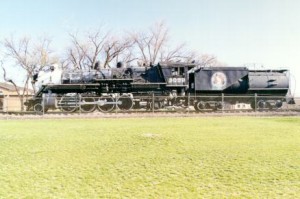 There’s a half-hour stop in Havre, Montana, where the train’s locomotives are refueled. Most of the passengers wander up and down the station platform, stopping to gawk at a huge steam engine on display right next to the station. 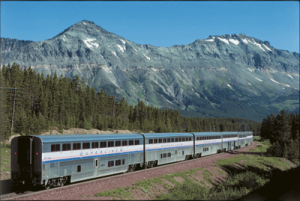 Toward the late afternoon, the Rockies come into view way up ahead and, by the time dinner is being served in the dining car, the Empire Builder is skirting Glacier National Park, threading its way through the rugged peaks, many still snow-capped well into June. 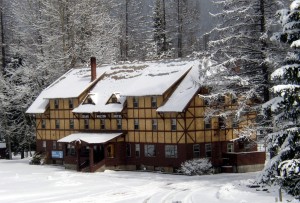 Just about dusk, the train passes the Isaac Walton Inn in the little town of Essex. This place is well known to rail fans because it sits right on the Burlington Northern Sante Fe main line and there is a lot of freight traffic. And I mean a lot. My wife and I stopped in the area for a couple of days last year and we had planned to stay at the Isaac Walton Inn. Plans changed abruptly when she learned that our room would be a couple of hundred feet from the tracks and freight trains come through every half hour or so all night.

The Empire Builder gets to Spokane about 2:00 in the morning which is where the train divides into two sections … one continuing on to Seattle, the other swinging south a bit and terminating in Portland, Oregon. (The process is reversed for the eastbound train.) 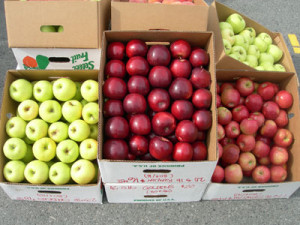 If you’re on the Seattle section, you’ll be near Wenatchee, Washington, when you wake up. This is really beautiful country, but it’s best known for its apples. Buy an apple in your neighborhood supermarket, and chances are very good it came from somewhere near Wenatchee.

From here it’s on to Everett where the train turns south and runs along the shore of Puget Sound, reaching Seattle around mid-morning. 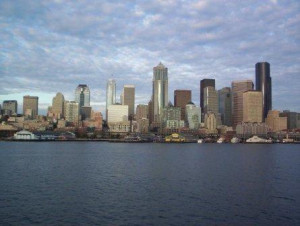 I’ve always felt very comfortable in Seattle and, truth be told, on several occasions I have elected to ride the Empire Builder just so I could have a day or two in this city … and as many meals as possible at Assaggio, a wonderful Italian restaurant.

In an earlier post, I said I thought the California Zephyr is Amtrak’s most scenic train. I’ll stick with that but, for whatever reason, I’m happiest and most content when I ride the Empire Builder. It’s my favorite Amtrak train; Seattle is one of my favorite mainland cities; and Assaggio is my favorite restaurant anywhere. That’s a combination I just can’t resist.