I know it doesn’t seem like it, but little by little, we are making progress. One of these fine mornings, we could all wake up and find that several Amtrak routes have been expanded, that the Sunset Limited and the Cardinal are running every day, that service between New Orleans and Orlando has been restored, and that an actual high-speed train, just like the ones the French have been running for 40 years, is whisking people from Dallas to Houston in 90 minutes. But don’t blab it around or the numbskulls in Congress will try to stop all of it. 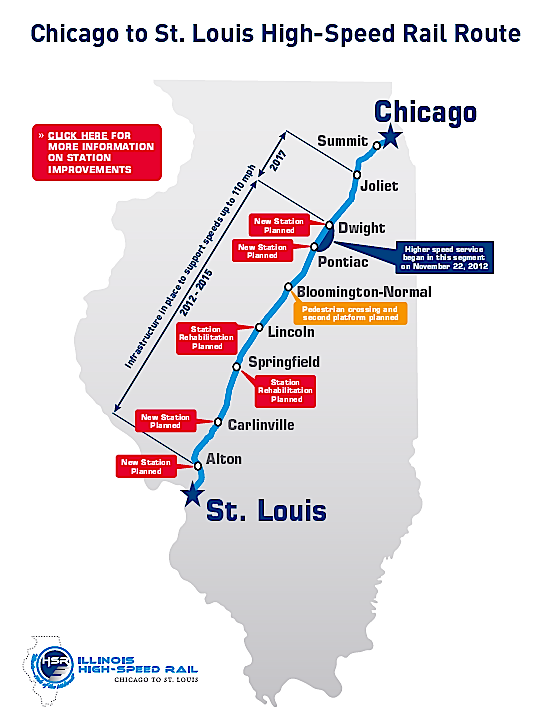 The latest in these incremental improvements should be inaugurated sometime this summer. It’s taken several years of start-stop-start-again construction, not to mention a total expenditure of $2 billion, but Amtrak’s Lincoln Service between Chicago and St. Louis will soon be increasing speeds from the current maximum of 79 mph up to 90 mph. And it gets better: In 2019, there will be some stretches on that route where trains will run at 110 mph. As of today, the entire 284-mile route takes about five hours and 20 minutes. When the work is completed, it’s anticipated that the schedule will be shortened by at least one full hour. (Incidentally, one very knowledgable member of the Rail Passengers Association observes that as far back as 1935, passenger trains being hauled by steam locomotives were routinely completing the Chicago-to-St. Louis run in 4 hours 55 minutes.)

On a related subject—and as part of the fallout from the awful derailment near Tacoma, Washington—several members of Congress have written to Elaine Chao, Secretary of Transportation in Washington, DC. They want to know where the various freight railroads stand regarding installation of the Positive Train Control system (PTC) which would likely have prevented that accident. Sorry, but it takes a helluva nerve for members of Congress to raise that subject. The PTC system is very expensive, literally costing each of the major freight railroads billions of dollars and while Congress required the railroads to install the system, of course they never provided any money to help pay for it.