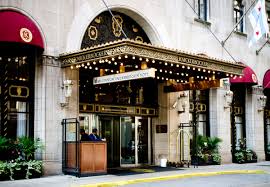 Our meeting was held in the Millennium Knickerbocker hotel in Chicago. It’s an old hotel but, by and large, it and its facilities served us well. 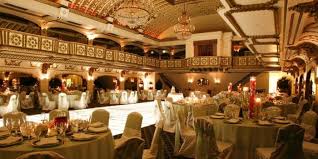 Our banquet on the final evening was held in the hotel’s Crystal Ballroom, which must be seen in person to be believed. The only problem, and it was minor, was the elevators. There are only three, each with a capacity of six people, assuming no luggage.

I was on my own for dinner last night and asked the bellman to suggest a nice restaurant nearby. He asked what kind of food I liked and, when I said “Italian”, he got a dreamy expression on his face and said, “Carmine’s! It’s a three-minute cab ride. You’ll thank me.”

I did more than that. When I got back from a superb dinner at Carmine’s, I tipped him five bucks!

I’m back on the train this afternoon: the California Zephyr departs at 2:00 this afternoon and will deliver me to Davis, California, on Wednesday afternoon. Thursday I’m driving to Napa for lunch aboard the Napa Valley Wine Train. I will have a report on that the following day, assuming the WiFi on the Coast Starlight’s parlor car is working.

I had the predictable conversation with a guy at an adjacent table at breakfast this morning. I ran down that brief schedule for him. We all know what his next question was:

“But how long is that going to take?”

“Two nights from here to Davis”, I said, “and from there to LA the next day is a fourteen-hour ride.”

“But that’s more than three days”, he said.