A Thousand Curses on Robo-Callers. 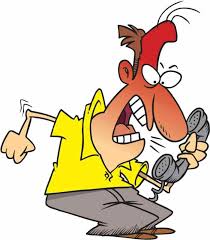 The first call today came at 5:40 a.m. It was a recorded female voice with a British accent. I’m pretty foggy at that hour, especially these days, but the pitch starts out with something about how interest rates on my credit card balance are going up.

Our second robo-call of the day—same recorded pitch about interest rates, same accent—came at 2:50 this afternoon. They usually call twice a day at about the same times.

Past attempts to get the name of the company have been unsuccessful. I have “pressed one” as instructed and waited for a live body to pick up, ready to pose as a potential customer, but that hasn’t worked. Either the wait drags on well past my patience or the person who finally answers hangs up almost immediately. I suppose I don’t sound stupid enough.

We probably average three or four other solicitation calls that come at random times throughout the rest of the day. Most are from non-profit organizations we support—Planned Parenthood, Doctors Without Borders, Public Radio, etc.—and from political committees such as the DCCC. Some are from individual politicians. Specific among those, by the way, is Brian Schatz, the young U.S. Senator from Hawaii. He’s an outstanding young man and is already attracted attention as a real comer in Washington. Keep an eye out for him; you’ll be impressed, I promise.

Some of the individual callers are working on a commission arrangement of some kind because they simply will not let you off the line, literally forcing you to be rude. I have found an effective way to deal with them, however. When they ask for me or my wife, I say, “They’re away out of the country for 90 days. I’m just the house sitter.” That ends the conversation very quickly. Except, of course, for the time the caller wanted to know how he could get a 90-day house-sitting gig on Maui.

Previous Back Home!
NextLucky Me.