Finding Friends in an Amtrak Diner.

I continue to say that one of the main reasons why I enjoy train travel so much is because of the interesting people I meet in Amtrak dining cars.

(For those who may not know this, Amtrak dining cars feature what they call “community dining”, which means if you’re traveling solo, you’ll be seated at a table with three other people.) 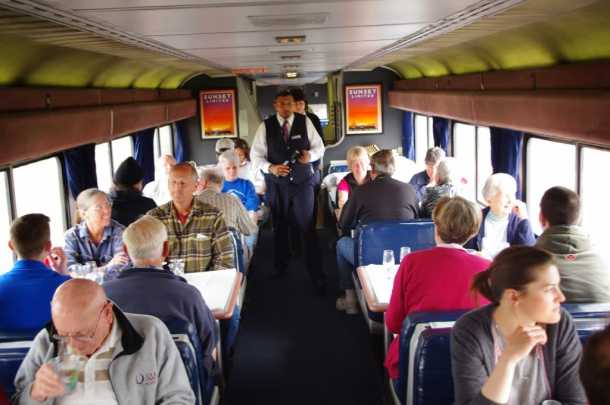 Here’s a sampling of the dinner/lounge car companions we had during the three-plus days my wife and I were aboard the California Zephyr and the City of New Orleans.

–A semi-retired physician who works for the State of California tracking down doctors who are carelessly or deliberately prescribing far too many opioids.

–An Australian in his late 50s who is taking a leisurely-but-extensive rail tour of the U.S. Back home in Australia, he’s railroad engineer.

–A young man from Silicon Valley who had never been east of Chicago, and was going to visit New York City, then taking Amtrak up to Boston to see that wonderful city, with side trips to Plymouth and Salem.

–Another young man, in his mid20s and originally from Ghana, who is living in Seattle and studying Communication Arts at the University of Washington. Bright, articulate, personable and oozing both confidence and determination, this kid will be an asset to any community. He’s a U.S. citizen, but is worried that Trump and Sessions will try to kick him out. That would be so pointless and so stupid, he’s probably right.

–At dinner last night on the City of New Orleans, we were seated with a 60ish woman from Biloxi, Mississippi. She enjoys train travel, especially meeting other passengers, and she rides this train a dozen or so times a year just for fun–up to Chicago and back the next day. I was not surprised to learn that she’s a member of NARP.

Sadly, there’s someone on almost every trip who opts out of the dining car experience and has the car attendant bring all meals to his or her sleeping car accommodations. I pity them; they have no idea what they’re missing!

Previous Notes from the California Zephyr.
NextBedroom A or Bedroom B?