Maui to Washington in 10 Days.

Later this afternoon (Thursday), I’m leaving here and taking a very indirect route to Washington, DC, for NARP’s annual Spring meeting. The first leg is a Hawaiian Airlines flight to Seattle, but unfortunately there won’t be time for anything but a night’s sleep. My flight arrives at 11:15 p.m. Seattle time and I’m taking Amtrak north to Vancouver, B.C. early tomorrow (Friday) morning. There have been the usual Spring mudslides affecting Amtrak Cascades service, including one that’s currently interrupting service between Seattle and Portland, but there’s nothing on the Amtrak website indicating any problems north of Seattle. Fingers are crossed.

Tomorrow night I will once again board VIA’s wonderful trans-continental train, The Canadian, for the four-night journey east to Toronto. I’m ashamed to say I am not clear as to how many times I’ve traveled aboard this iconic train. I really wish I had kept track because it’s almost always at the top of my list whenever someone asks me to recommend a truly memorable train ride. 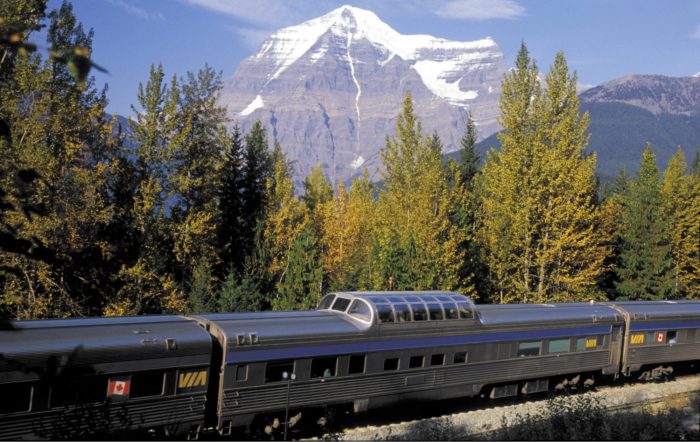 VIA Rail Train #2, the eastbound Canadian, will leave Vancouver at 10:00 p.m. tomorrow night and we’re scheduled to arrive in Toronto at 9:30 on Tuesday morning. By a very happy coincidence, the Red Sox begin a three-game series with the Toronto Blue Jays that same night. I have my tickets and unless the train is more than nine hours late, I will be there in time for the first pitch.

Unhappily, the train’s iconic status does not impress dispatchers for the freight railroads over whose tracks this VIA train operates. Consequently, freight trains are often given priority and The Canadian is frequently late arriving at either Toronto or Vancouver . . . sometimes many hours late. In fact, note the disclaimer that pops up on the VIA web site when you’re booking this train. 

While VIA endeavors to operate on time, the realities of increased freight traffic on tracks that we do not own may give rise to significant delays. We suggest that you do not arrange connecting transportation on the day of your arrival.

Personally, I would not like to miss the first game of the Red Sox-Jays series, but most of the time I’m not particularly bothered if I’m on a train that’s running late. I usually take the view of a British gentleman I met years ago on the Empire Builder. We were having lunch in the dining car somewhere in Montana when the conductor stopped by our take to tell us a freight train had broken down up ahead of us and we would probably be four hours late into Seattle. My table mate beamed. “Jolly good!” he said. “Then we really are getting our money’s worth, aren’t we!”

Previous Chickens Back Home and Roosting.
NextDay One: A Small Hitch.