Caltrain is a commuter rail system in California operating between South Bay and San Francisco. Railroad officials have wanted to electrify the system for some time because it would allow them to run their trains at somewhat higher speeds than the diesel locomotives can manage and, even more important, it would save money and be non-polluting. What’s not to like?

Caltrain applied for and was awarded a federal grant of $647 million from the Obama Administration’s Transportation Department for their electrification project.

It so happens that there was another future benefit to the electrification project—it would have reduced the cost to taxpayers for California’s Los Angeles to San Francisco high-speed rail project because those trainsets are powered by the electricity they would draw from those very same overhead wires.

Well, that was more than enough of an excuse for all 14 Republicans in California’s Congressional delegation, who wrote to Trump’s newly appointed Secretary of Transportation, Elaine Chao, asking her to put the Caltrain grant on hold until a full audit could be done on the high-speed rail project. 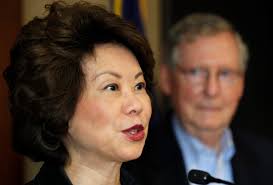 Of course, Secretary Chao—who happens to be the wife of the Senate Majority Leader, Republican Mitch McConnell—immediately complied, having been on the job for two weeks and no doubt thoroughly familiar with all the relevant issues of both projects.

So Caltrain, having already picked contractors for the project, is screwed; many thousands of high-paying jobs have gone in a puff of smoke; and every day for the foreseeable future, 60,000 Bay Area commuters will continue to travel on an outdated system.

Representative Anna Eshoo, a Democrat from Palo Alto, summed up the sudden evaporation of an important, shovel-ready project quite succinctly: “I never imagined that the electrification of a train would be subjected to such brutal, partisan politics.”

Better get used to it, Anna.

Previous Which Is The Best Way West?
NextBuy Early for Best Amtrak Tickets.