In round numbers, Amtrak trains stop at more than 500 stations all across this country. Some are huge complex facilities, but most see just two trains a day with a relative handful of passengers getting on and off. These are the stations from which, faced with the need to cut costs, Amtrak has been methodically eliminating ticket agents.


The latest station affected is Huntington, West Virginia. Amtrak’s Cardinal stops in Huntington just six times a week—three trains bound for Chicago, the other three headed for New York. About 20 people board or get off each of those trains—not big numbers, but that still adds up to almost 6,000 people a year.

Amtrak’s rationale for eliminating ticket agents at these low-volume stations is that most people are now buying their tickets on line. I’m sure that’s true, but the ticket agents also provide up-to-date arrival and departure information, assist elderly and disabled people on and off the train, handle checked baggage coming in and going out, answer any and all questions, and make appropriate boarding announcements. They are also, in fact, the face of Amtrak in their communities.

In fairness, it should be noted that the affected stations aren’t being completely abandoned. Caretakers are hired by Amtrak to open up a half hour before the train arrives and keep the facility clean. But it’s not the same. Not nearly.

And why does Amtrak have to be burdened with these small town railroad stations anyway? The municipalities should own them in the same way they own airports and bus stations. If restored and renovated, railroad stations can become destinations in their own right … focal points for any number of activities, with shops, restaurants, grocery stores, offices and commercial ventures of all kinds. 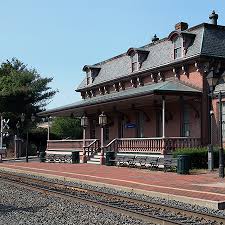 This is the historic old railroad station in Windsor, Connecticut. It has no ticket agent, but the building has been preserved and restored and I am told it now contains an art studio. The point is, when Amtrak eliminates a ticket agent, civic leaders need to step up and take over the facility, renovate as necessary, then find ways to recoup the cost. How? Rent out the space to a restaurant, a retail shop, or worthy non-profit.

Better yet, expand the facility and turn it into a multi-modal transportation center—an idea that has triggered the revitalization of surrounding neighborhoods in other cities and towns.

I can think of two examples where that’s already happened: Meridian, Mississippi, (photo above) and Galesburg, Illinois. In both towns, the railroad station has been restored, expanded and turned into a multi-modal center, meaning it also serves local and regional buses and taxis. And that, in turn, has revitalized entire neighborhoods surrounding these stations.

So Amtrak can off-load the expense of staffing literally hundreds of small stations, small towns acquire facilities to generate income and stimulate the local economy, and Amtrak passengers have the use of a safe, well-maintained station. What’s not to like about that?

Previous Some of Us Get It. Some Never Will.
NextHonolulu’s Pink Lady Is Still Classy.