Amtrak Nemesis Mica Is In Trouble.

Congressman John Mica (R-Florida) has made a political career out of bashing Amtrak, “America’s soviet-style railroad”. (Mica has been using that line for 20 years. He delivers it, then pauses and smirks, waiting for the audience reaction, which is usually a few polite titters.) 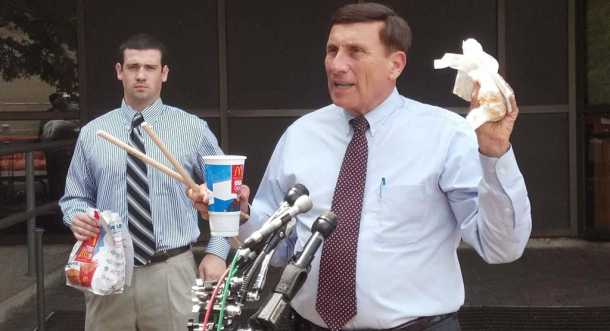 Most recently, Mica has been picking on Amtrak’s Food & Beverage operation, claiming Amtrak should be making money from its dining cars. To “prove” his point, he invited the media to watch him wave a Big Mac at a passing Amtrak train.

Every year, the National Association of Railroad Passengers (NARP) presents its Golden Spike Award to an individual who has made a significant contribution to the advancement of passenger rail in this country.

Under prior NARP leadership, it was the policy to alternate recipients according to political parties—this year a Democrat, next year a Republican. Which is why, about ten years ago, NARP presented its Golden Spike Award to—believe it or not—John Mica, who was at the time, chair of the House Transportation Committee. The presentation took place at the formal luncheon on the final day of our annual meeting held every April in Washington.

Mica showed up late, accepted the award, and made a few brief remarks. He concluded by saying he had to leave to chair a very important meeting of the Transportation Committee. He said he was trying to get $5 billion for a new runway at Miami International Airport … just what a group of advocates for passenger rail wanted to hear.

As a member of the House, the 73-year-old Mica is up for re-election this year … but, for the first time in a long time, he’s in trouble. His opponent is Stephanie Murphy, daughter of Vietnamese immigrants, mother of two, a former national security expert, and now a professor in the Rollins College Business School.

I’ve made a contribution to this bright young person and I respectfully suggest that you consider doing so, too. Here’s the link to her campaign web site. And guess what! According to the most recent poll, Ms. Murphy is leading John Mica by three points!