Here are a few random observations while on train #5 from Glenwood Springs to Davis and from Davis to Los Angeles on the Coast Starlight.


Train #5 arrived in Glenwood Springs at 2:18 p.m. It was 25 minutes late. The LSA from the dining car sought me out on the platform as I was boarding and said they had kept the diner open in case I wanted lunch. Is that great service or what!

Car Attendant had taped a small hand-written sign on the door of my roomette when I boarded the Zephyr in Glenwood Springs: “J. Loomis—GSC-DAV—Welcome Aboard.”

That same car attendant, Paul, says he is unable to get a roll of duct tape or a pair of gloves in Chicago where he is based. Both were provided with no problem when he got to Emeryville. (Note to readers: Duct tape is the one indispensable item in a car attendant’s “tool box”.)

The parlor car attendant on the Coast Starlight says as of the first of the year, there will be only one train a week in each direction with a parlor car as part of the consist. He said it was his clear impression that this would be a permanent change. Supposedly the two days for each trip will be the same every week and passengers will be able to call Amtrak Reservations in advance to book the train with the parlor car. (Wanna bet there will be higher fares for those days?) 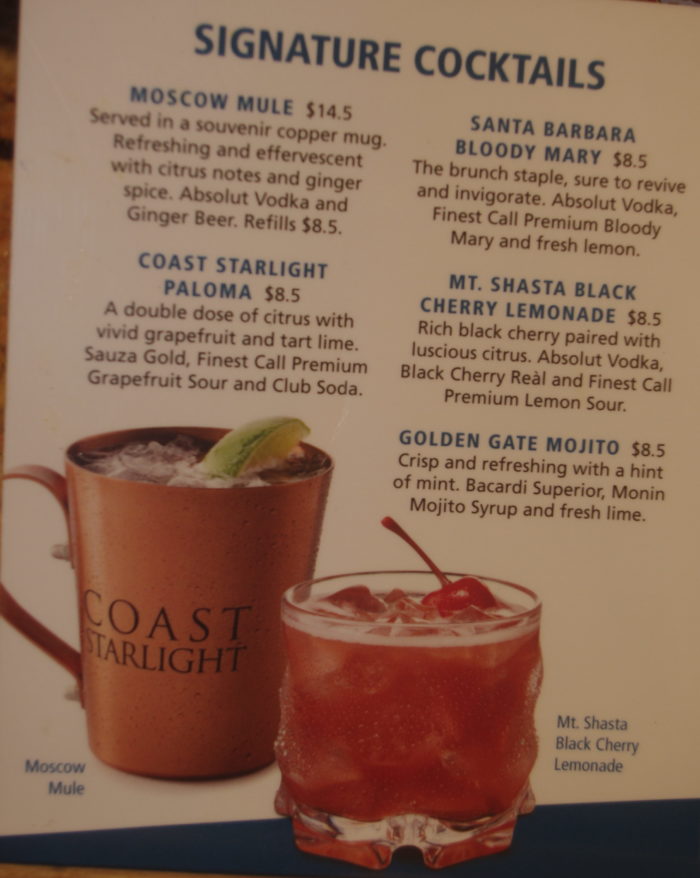 “Signature Cocktails” are now being served in the Pacific Parlour Cars. The Moscow Mule costs $14.95, but comes in a copper mug which you can keep; the other drinks come in plastic cups, despite being shown in a real glass on the four-color promotional card in all the sleeping car accommodations.

Amtrak simply must stop promoting services when the reality falls well short of the hype. Better that passengers be pleasantly surprised than disappointed.

Previous Goofing Off for a Few Days.
NextBits and Pieces and Random Thoughts.