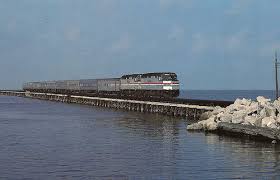 CHICAGO–There were only six or seven sleeping car passengers waiting to board #58 in New Orleans, and that included a young couple only going as far as Jackson, Mississippi. By contrast, there was a long line of coach passengers . . . well over 100, I would guess.

The windows in the one sleeping car were dirty, a light brown film essentially tinting the glass. This is a hot button for me. I know it’s not a particularly scenic ride, but still . . . clean windows, please!!

The sleeping car attendant is Jermain. Quiet, even a bit reserved, he seems to be in the car only just before station stops. Roomette #1 is full of his supplies and spare linens, so I assumed he had accommodations in the dorm car. He was nowhere to be found when I was ready for bed, but appeared just 15 minutes later as we approached Memphis.

In addition to the usual Sightseer-Lounge car, and in lieu of a full service dining car, this train carries a “diner/lounge”. One half of the upper level is the lounge area with booths for sitting around, playing cards or having a drink and some snacks. The other half is the dining area with booths for four.

The middle area is the domain of the LSA, a cheerful young woman named Amy. She is in charge of selling snacks and drinks to folks seated in the lounge or coming up from the several coaches. She also prepares the meals for passengers in the dining area which, in this case, means putting frozen and shrink-wrapped meals into a microwave. I chose a pulled pork with barbecue sauce offering which came with macaroni and cheese and corn. It was actually pretty good.

Much of the trip–from New Orleans to Jackson and even beyond–was a very rough ride, the worst I’ve ever experienced.

Finally, later in the evening, I had an interesting conversation with Amy, the LSA, about some of the problems and concerns she deals with. No new information, but I did hear an all-too-familiar phrase: “Nobody listens to us.”

What makes management types think they know more than the employee that actually does the job? This is a phenomenon that seems to be common in all big companies. And it’s dumb.

Previous New Orleans Is A Bit Different.
NextOvernight to Denver on the Zephyr.