How To Fix VIA’s On-Time Problem. 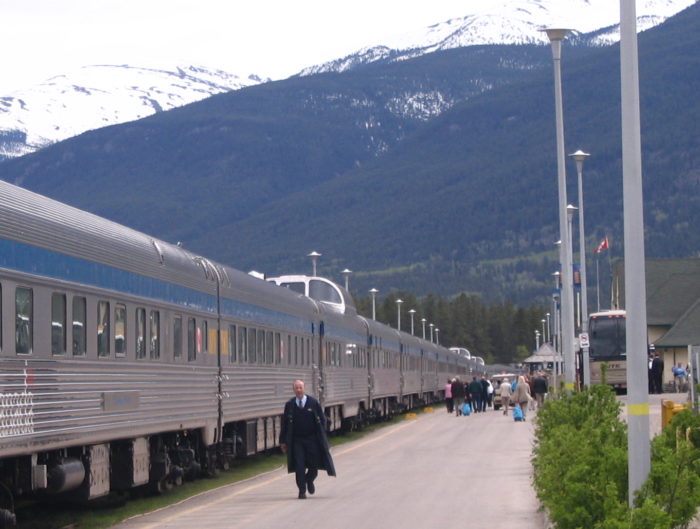 VIA Rail’s storied train #1, the Canadian, is always included on lists of the 10 or 20 best train rides in the world. And deservedly so. It’s certainly the best long-distance train ride in North America: superb scenery; classic rail cars, many of which have been beautifully refurbished; excellent on board service; and wonderful food. And of course it helps the Canadian economy because the train attracts thousands of tourists from all over the world.

But what the freight railroads have done over time to this iconic train is sad. No, it’s worse than sad; it’s an outrage.

The problem, in as few words as possible, is that VIA’s train runs on track owned by Canadian National and Canadian Pacific, the country’s two huge freight railroads, and they give priority to their trains. That means the VIA train has to pull off onto sidings, where it sits and waits until a freight comes trundling by before resuming the journey. And, believe it or not, that happens as many as 20 or more times a day.

VIA has done as much as it can to allow for all those delays by adding many hours to their train’s schedule. What was a three-night trip now take four nights to complete. Of course, that has added millions to the cost of operating the train, but it hasn’t solved the problem. The Canadian continues to arrive in either Vancouver or Toronto hours late . . . and by that, I mean as much as ten or twelve hours late. Sometimes even more.

That, in turn, burdens VIA Rail with still more additional cost—for hotel rooms, meal vouchers and alternate transportation for inconvenienced passengers—not to mention damage to the train’s reputation which must inevitably result in the loss of future revenue.

Yes, yes … I know: the freight railroads own the tracks, and diverting and delaying VIA is entirely within their legal rights. That’s private enterprise. That’s capitalism. But that doesn’t mean it’s not an outrage. A drug company in the U.S. has just raised the cost of a life-saving medication by 600 percent because they can. But it’s still an outrage.

And don’t tell me there is nothing government can do. What if Prime Minister Justin Trudeau were to summon the president of each freight railroad to his office and say, “Starting tomorrow, your dispatchers will keep the VIA train running on time. If they don’t, I will have government inspectors swarming over your railroad like flies on a cow pie and we’ll slap you with maximum fines for every single infraction they find, no matter how small, until your entire operation shuts down.”

Would that be legal? Probably. Would it be an abuse of government authority? Perhaps. Would it be in the public interest? You’re damn right it would!