A Floating Treasure is Threatened.

In her day, the Falls of Clyde was a four-masted, fully-rigged workhorse. She was built in Port Glasgow, Scotland, in 1878, so she’s almost 140 years old. That alone makes her special, but what makes the Falls of Clyde unique are the several iron tanks that fill her hold. She is, in fact, the last surviving sailing oil tanker. 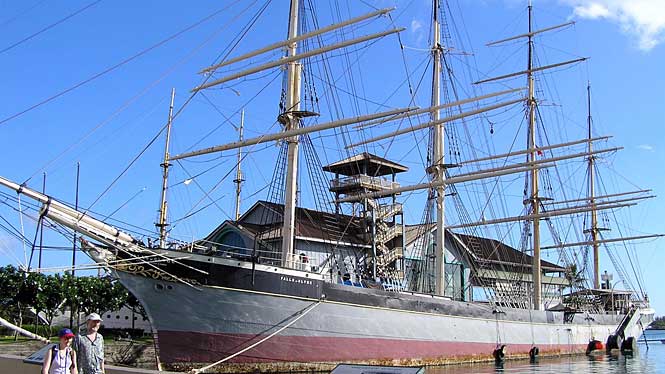 The Falls of Clyde became a museum ship in 1971 and has been moored in a prime spot on the Honolulu waterfront ever since. Unfortunately, she was pretty much an unwanted stepchild from the very beginning. Honolulu’s Bishop Museum, the principal repository for Hawaiian artifacts and history, gave up on it in 2008 and announced plans to tow her out to sea and scuttle her. That poked a hornet’s nest and a great hue and cry went up: Save the Falls of Clyde!

As a result, a non-profit citizens’ group, Friends of the Falls of Clyde, was formed and acquired the ship. Their plan was to move it to dry dock, make needed repairs, then return it to an anchorage somewhere on the Honolulu waterfront and begin a complete restoration, ultimately turning the vessel into a floating museum.

That was 2008, but the ship still languishes in a prime spot on the Honolulu waterfront waiting for those repairs to begin. In the meantime, the State Harbors Division has stepped in and is demanding that the ship be moved.

The trouble is, the Friends of the Falls of Clyde have passion and energy, but no money. What they need is a champion … someone with clout … someone who can tell the Harbors Division to back off … someone who can come up with serious money. Contacting the governor’s office would be a good start.

Even if Governor David Ige does intervene, the Falls of Clyde still faces long odds. But here’s the thing: society cannot simply shrug it off when this kind of a unique link to the past is threatened. Yes, it takes money and it takes resolve, but the effort has to be made.