The Cardinal Could Go Daily! 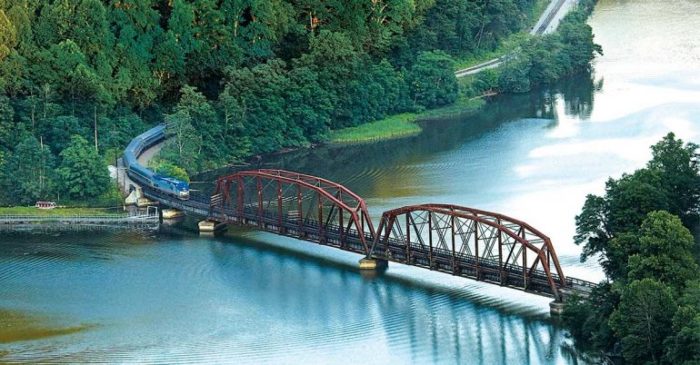 Wow! It appears that a number of forces have combined and there is actual movement toward a daily Cardinal. Ironically, the recent flooding in parts of West Virginia has played a part of this “perfect storm” of events.

The Cardinal, for those who may not know, runs on a meandering southerly route from Chicago to Indianapolis and Cincinnati, through the New River Gorge (photo above), crosses the Shenandoah Valley, climbs over the Blue Ridge Mountains to Charlottesville, then on into Washington and, from there, up the Northeast Corridor to New York City. It is a great ride.

But it only happens three days a week. There has been talk for years about running the train daily, of course, but as far as I can tell, it’s been sporadic and half-hearted since it has been accepted as fact that a daily Cardinal was simply not in Amtrak’s plans. “Unwanted step-child” was a phrase often heard.

But a series of efforts and events have occurred recently that could change all that. First, NARP produced some public service radio announcements urging a daily Cardinal and, through the efforts of almost 30 NARP members, almost 200 radio stations in towns and cities all along the Cardinal’s route agreed to air the spots at no charge.

Second, I am short on specifics, but I do know that the Cardinal was used to transport school supplies to areas of West Virginia devastated by terrible flooding in recent weeks, underscoring the important role a train–any train–can play when disasters strike. It is simply unacceptable to tell people facing dire circumstances that they’ll have to wait for badly needed supplies “because the train only comes here three days a week”.

Third, non-profit passenger rail advocacy groups like NARP and Friends of the Cardinal and All Aboard Ohio have been banging this drum for years and their voices were added to the clamor when their members stepped up the letter-writing to local newspapers and public officials.

And finally–hold onto your chairs now!–after adding Business Class and an additional sleeper to the Cardinal’s consist and being pleased with the results, Amtrak says they want to hold meetings with advocacy groups to discuss the feasibility of running the train on a daily basis.

Previous From Chicago to the Bay Area.
NextFalling Short in Big Little Ways.