Locking Horns With a French Waiter.

My last night in Montsoreau was a delight. I invited Françoise to dinner at a restaurant just down the street from the three guestroom B&B she owns and runs. She is an intelligent, charming and very witty woman which, of course, made it a most enjoyable evening.

The menu noted that, in addition to a main dish, guests could choose one side dish. Note: one side dish. The choices were small roasted potatoes, traditional French fries, or the inevitable haricots verts (green beans). When the waiter arrived, Françoise ordered a Caesar Salad and I ordered the breast of duck. But I asked if it would be possible to have both French fries and the green beans?

The waiter shook his head firmly. Only one side dish. Evidently, that was cast in stone.

OK, but what, asked Françoise innocently, if monsieur is willing to pay extra for les haricots verts?

The waiter seemed quite defensive in his rapid response in French to Françoise. “He says,” she informed me, “that cannot be done because no one has determined what the price would be for a side dish sold separately.”

Françoise relayed that radical idea to the waiter, who blinked and groped for a reason why that would not be possible. Finally, however, he muttered something and stalked off toward the kitchen.

Françoise could barely contain herself. “He said that can be done,” she gasped, “but it may take a little longer.” The absurdity of the whole scene finally got the best of us and we howled with laughter. 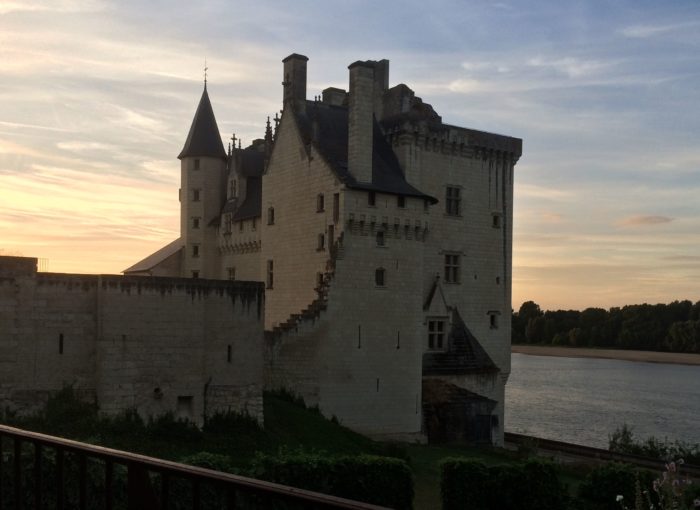 By the way, this was the view from our table at the restaurant: it’s a small chateau, which the private owner has filled, top to bottom, with contemporary furnishings. Go figure!

Observations from my return today from Montsoreau to Paris:

* While changing trains in the railway station in Angers, I bought a cup of ice cream: Ben and Jerry’s. The two guys from Vermont have done good.

* When dressing casually, lot of French men, ages mid-20s on up, wear pants that are cut off halfway from the knees to the ankles. Pedal pushers! Mon Dieu!

* Angers St Laud station is very busy and in 90 minutes I saw several people pedal their bicycles directly from the street into the station, out to the platform and right onto the train.

* The dandy little Speed Box app on my smart phone had the TGV from Angers to Paris running consistently at around 115 mph, topping out on several stretches at 186 mph.

Tomorrow: The Eurostar to London.