What’s In a (Railroad) Word?

It has always been interesting to me how expressions belonging to a specific activity or sport or occupation eventually become part of everyday language but with a broader meaning. Baseball, for instance has made a number of contributions like that. If someone makes an effort at something and fails, we say he “struck out”.

And of course railroading has contributed numerous examples, including the following:

Sidetracked. To be diverted, but the reference, of course, is to the moving of a train onto a siding so another train can pass. 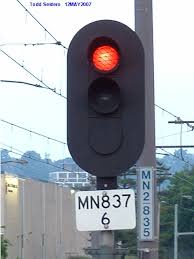 Blocked. It means obstructed today, but in the railroad context, a stretch of track between two signals is called a block, and if the first signal is red, a train cannot enter a block.

Derail. It can be disappointing when this happens to “the best laid plans”. In railroading, it usually means a really big mess.

Full head of steam. Originally, this referred to a steam locomotive with maximum pressure in its boiler.

To flag down. The old railroad practice was to signal the engineer to stop for passengers at remote stations with a colored flag. Radios are now mostly used today, but they’re still called “flag stops.”

Blowing off steam. It refers to relieving pressure in the locomotive boiler when it got to dangerous limits.

Over the hump. In rail yards, freight cars are pushed over a high point in a rail yard—called “the hump”—so they can roll easily by themselves onto a siding or to join a train being assembled.

Cut and run. When a steam locomotive unexpectedly ran low on water, it had to uncouple (cut) from the rest of the train and head (run) for the next watering point.

Hell on wheels. This was a reference to the gamblers and prostitutes who followed railroad crews in their own rail cars while the transcontinental railway was being built.

There are more—a lot more, I’m sure—and I keep coming across new ones. Contributions from readers will be gratefully received, collected and eventually acknowledged.

Previous Where I Put My Seat Matters to Me.
NextVIA Rail May Finally Get a Break.