Dick Tracy Would Be Amazed.

When I was a kid, it was a Sunday morning ritual in our house—and probably in most of the homes all over America—to pour over the comics that came with the big Sunday paper.

The featured character in one of those strips was Dick Tracy, a police detective, and one of the tools in his crime-fighting arsenal was a tiny radio—a “two-way wrist radio”— which he had strapped to his wrist list like a watch. It was such a novelty … such a miraculous, futuristic, improbable apparatus … that the cartoonist felt it necessary to indicate what and where it was whenever Tracy employed it. 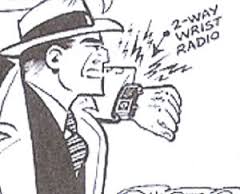 As far as I know, at that time such a device existed only in the cartoonist’s imagination. Radios were complicated and bulky and required a number of fragile vacuum tubes in order to function. Back then, a radio small enough to be strapped to someone’s wrist was possible in theory only.

Also around that time, a few people on the block were starting to get the first TV sets. Some described it as radio-with-pictures and I remember wondering what could possibly be so interesting about seeing people standing around a microphone reading from scripts.

My grown daughter has a black belt in aikido and along with several members from her dojo here on Maui, she is currently visiting a sister dojo in St. Petersburg, Russia.

As I am typing this, my granddaughter, Lehua, is in the other room, literally having a face-to-face conversation with her mom via Skype. My daughter just held her laptop to show us the view of the city from her hotel room window. In St. Petersburg! Thirteen time zones from here. In Russia!

Previous And the Worst Is Yet To Come!
NextIt’s Worse Than an 11-Hour Bus Ride.