Rolling the Dice With the Tunnels.

There has been a lot of talk over the past couple of years about the need for a new railroad tunnel under the Hudson River connecting New York City with New Jersey. Of course it’s actually two new tunnels—one in each direction.

But now there’s a new study out that says it’s very likely that the old tunnels will need major repairs before the new tunnels can be completed. That wouldn’t be a surprise to transportation officials. They are painfully aware that the tunnels are more than 100 years old and that the damage caused by Hurricane Sandy in 2012 may have further shortened their effective life. 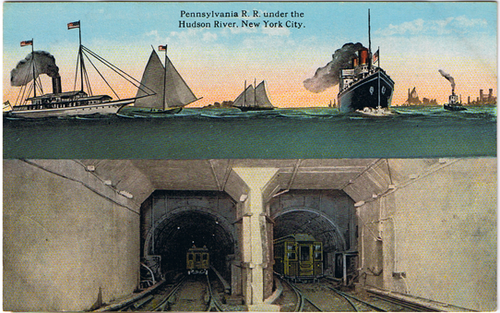 Should one of the existing tunnels fail, they have said, the commute from New Jersey would become an instant nightmare. New Jersey Transit carries an estimated 90,000 commuters through those tunnels and into Manhattan every workday. But it’s more than just commuters from New Jersey . . . much, much more. These two 100-year-old tunnels connect New York City with the entire eastern seaboard . . . thousands of passengers arriving every day on dozens of Amtrak trains. Add to those trains, the Cardinal, bringing people to New York from Chicago and Indianapolis. Then there’s the Crescent, arriving at Penn Station by way of New Orleans and Atlanta.

Cost estimates for the new tunnels are now running to $20 billion, with the money coming from all of the interested parties: the states of New York and New Jersey, the feds, and Amtrak. And they had damn well better get started. Estimates are that even if the project is fast-tracked, there is still a one-in-ten chance that one of the two existing tunnels will have to be closed for repairs before the new tunnels are ready for use. And—God forbid!—should both tunnels be out of service at the same time, the estimated hit to the regional economy is one hundred million dollars a day. That’s right: a day!!

Question: Why the hell did we wait so long to confront a situation everyone knew was coming?

Answer: Because the cost-cutters and the tax-cutters in government would rather take a chance on wrecking the Northeast’s economy than shell out 20 billion tax dollars for two new tunnels. And that’s just stupid.

Previous Out With the Old; In With the New.
NextPrince Loses Its Station Agent.