How Haute Couture Came to Hawaii.

Working folks on the mainland are surprised to learn that aloha shirts are considered appropriate as business attire in Hawaii. There is one important proviso, however: they must be tucked in. Aloha shirts worn out? Well, that’s informal attire. A friend’s backyard cookout would be the right venue. Or a trip to the shopping mall on a Saturday morning.

It was by no means always that way. In 1962, when I first arrived in Honolulu, local businessmen dressed quite conservatively, meaning business suits, although they were commonly made of lightweight fabrics suitable for the tropics . . . like seersucker. And you would also see a lot of suits and sports jackets in lighter shades of brown and gray.

Then one day, I think it was in the early 1970’s, a delegation from Hawaii’s garment industry came to see the mayor, Frank Fasi. They asked if he would consider issuing a proclamation designating the last day of the work week from Memorial Day to Labor Day as Aloha Friday and proclaim that aloha wear–that is, aloha shirts and muumuus–would be considered acceptable business attire on those specific days. 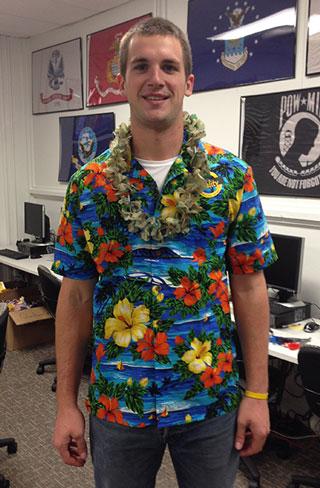 Realizing that it would be a boon to the local garment industry, Frank was happy to do it. And so, Aloha Friday was born. It became an almost instant success, with men and women at almost every level in the local economy buying new aloha shirts and muumuus.

A couple of years later, the garment industry came back to Mayor Fasi requesting one more proclamation–this time, to create Aloha Summer, which would be from Memorial Day to Labor Day. Frank was glad to oblige. Labor Day came and went and the aloha shirts stayed,. Since then, it has been officially acceptable to come to work in aloha wear year ’round.

Of course, a proclamation from the mayor has no legal standing, but that’s how it happened and now we can wear aloha shirts to work whenever we want. As long as they’re tucked in.

Previous To Toronto on The Maple Leaf.
NextA Smatter of Opinion.