A relative of mine has just made a round trip on Amtrak from Washington to Florida and back. He took the Silver Meteor southbound and the Silver Star back. Understanding that his experience is just one person’s observation of just two train rides, his report is nevertheless interesting and begs further discussion.

On his return trip, northbound on the Silver Star, he reports that the consist was one locomotive, a baggage car, two Viewliner sleepers, a cafe/lounge car and three coaches. That surprised me. I would have expected a much larger consist. After all, March is smack in the heavy tourist season for Florida—northerners sick of the cold weather heading south, baseball fans attending Spring Training games, retirees heading home after wintering in the south.

But then came a bigger surprise. My nephew says none of the bedrooms and only about a third of the roomettes were occupied in either of the two Viewliners.

That started me wondering how Amtrak is pricing space in sleeping cars on the two Florida trains now that the dining car has been permanently taken off the Silver Star as a trade-off for lower fares. So I spent a half hour on the Amtrak web site looking at fares for the two Florida trains about two weeks in the future.

The first date I tried was the 25th of this month, and discovered that the sleepers are completely sold out on both trains—all bedrooms and all roomettes are gone. The following day, the computer shows the Star completely sold out and no roomettes left on the Meteor, although there is one bedroom available for $1005. 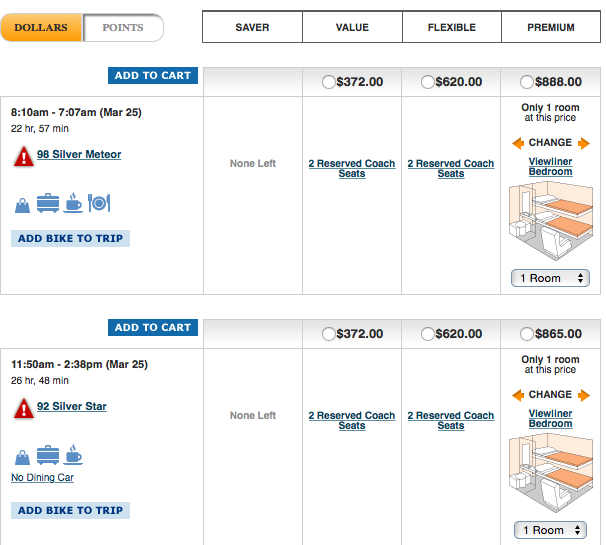 But if you want to travel one day earlier, on March 24th, you can book a bedroom for you and a companion on the Silver Star from Miami to Washington for $865. Of course, there’s no dining car on that train, so you’ll have to pay for all your microwaved meals in the lounge car. But wait! On that same day, you can book an identical bedroom for two adults on the Silver Meteor for $888. Huh? For just an additional $23, the two of you get all of your meals in a full service dining car. How’s that for a bargain! How’s that for making no sense whatsoever!

I’m willing to concede that Amtrak’s computer probably knows what it’s doing … that somewhere deep down in amongst all the bits and bytes we could find a few grains of logic and reason to justify those fares. But shouldn’t some thought be given to the effect weird fares like that have on ordinary folks just trying to get home after two weeks in the sun … when a bedroom is $800 on Tuesday and $1350 on Wednesday? Or when $23 buys two people four or five meals each in the dining car?