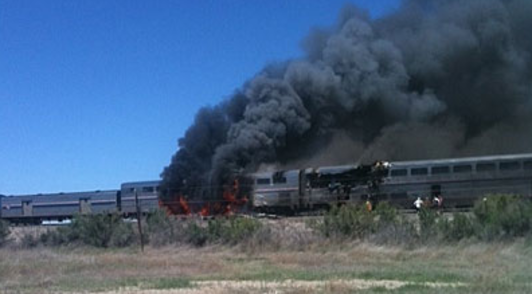 In 2011, a semi-trailer truck, barreling down a Nevada highway near Reno, crashed through a lowered barrier, past the flashing red lights, and plowed into the side of Amtrak’s California Zephyr. In addition to the truck driver, five people on the train died.

Here’s a quote from a story that caught my eye in today’s New York Times:

“More people will be killed in traffic accidents involving large trucks this year than have died in all of the domestic commercial airline crashes over the past 45 years, if past trends hold true.”

The reality is that fatalities from accidents involving big trucks are increasing every year and totaled 4,000 people in 2013.

That’s bad enough, but what’s really infuriating is that despite efforts by regulators to toughen safety requirements, the trucking industry keeps pushing Congress to relax regulations. For instance, the current rules say that someone driving a big rig across state lines must be at least 21 years old. The trucking industry wants the minimum age reduced to 18.

The industry also wants to scrap the current requirement that drivers of these big, long-haul trucks get two full days off each week.

Here’s a better one: under existing regulations, truck drivers can’t work more than 70 hours over an eight-day period. The industry wants the rule changed so that drivers can be behind the wheel for 82 hours a week. Did you notice that regulatory sleight-of-hand … the switch from eight days to seven? Sneaky buggers, aren’t they?

But how can that happen? Why does the trucking industry have such influence in Congress? Well, first of all, regulators can only enforce the rules that politicians pass into law. And then there’s the Supreme Court decision that said there is no limit to the size of campaign contributions that can be made to members of Congress by corporations and industry lobbyists.

And as we head for another election year, we’re still hearing angry people complaining that government … especially the federal government … is intruding into our lives. Too much regulation, they yell. Government isn’t the solution, it’s the problem. Don’t tread on me … yadda-yadda-yadda.

And while the rest of us do our best to be informed and come to conclusions based on facts, the politicians — not all, but a lot of them — just vote the way they’re told by the lobbyists for the big banks and the defense contractors and the pharmaceutical companies. And, of course, the trucking industry.

It’s probably just a question of time before enough of the knee-jerk anti-government jerks stop yelling and actually take a look around. It just better not take too long.

Previous So Many Trains, So Little Time.
NextWisconsin Taxpayers Come Up Less Than Empty.