Why Amtrak Should Never Be Profitable.

We continue to hear people say that Amtrak should be making a profit. Some of that talk comes from the uninformed, but mostly it’s from Republicans in Congress, and that’s discouraging because they get paid to know better.

Knowledge has very little to do with it, of course, because they begrudge Amtrak its meager annual subsidy on philosophical grounds. The trouble is, these people miss the essential point: Amtrak is a national passenger rail system—emphasis on “national” and “system”—and that means it’s role is to provide as many Americans as possible with an affordable public transportation alternative.

Could Amtrak make a profit on routes connecting two or more major population centers? Quite possibly. But Amtrak’s mandate as a national passenger rail system is to serve both big cities and small towns, because Americans should have access to affordable pubic transportation almost no matter where they live. (This, by the way, is the very same reason why our Interstate Highway System was created and continues to be maintained by government subsidy.)

But is it acceptable for us, as a society, to tell a retired couple from Garden City, Kansas, that the only way they can see their brand new granddaughter in Gallup, New Mexico, is to drive the 720 miles in the family car? Isn’t that what Amtrak’s subsidy is really for? To keep the Southwest Chief running once a day, every day, through Garden City even if it doesn’t make a profit? What the Scrooges in Congress don’t understand or won’t accept is that the long-distance trains are needed because they provide millions of Americans with mobility!

But Congress—by and large a cold-hearted bunch—directed Amtrak to make a profit. And, by cutting costs wherever possible, Amtrak is actually making progress in that direction. Five years ago, the government subsidized Amtrak’s operating budget by $565 million; this year it’s less than half that, just $250 million.

Sound good? Not really. If Amtrak somehow manages to break-even in the next year or so, it will have been done it by continuing to use old outdated equipment, deferring maintenance and infrastructure repairs, and cutting costs by using plastic plates and eliminating fresh flowers on the tables in the dining cars. How long could that kind of “profitability” possibly last? 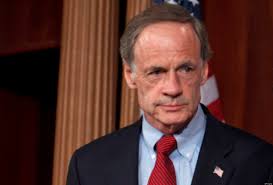 In a recent article in the Philadelphia Inquirer, Senator Tom Carper (D-Delaware), photo left, a former member of Amtrak’s board of directors, laid out exactly what has to be done. “Amtrak needs investment. It needs certainty. It needs dedicated funding,” he said. Then he added a shameful truth, “There are some people where I work who would just as soon kill Amtrak.”

Jim Mathews, president of the National Association of Railroad Passengers, was also quoted in the story. “(Amtrak) looks like a company, but it’s really a government agency,” he said. “People complain that a ‘real’ company could be more responsive to markets and its customers. That’s like getting angry when frogs can’t fly. … When you have a congressman deciding the price of a hamburger in a dining car, how can you possibly make the best decisions for the customer?”

Previous Learning a Lot About Travel Insurance.
NextLoyalty Is Not a One-Way Street.