Mexican Elephants Are Hard to Find.

Jim Loomis April 13, 2014 All Posts, Mexico 0 Comment
Some years ago, I took one of the more memorable train rides in the world – El Chepe, which is the affectionate name locals have given to both the Chihuahua al Pacifico Railroad and to the train itself. It runs across half of Mexico, from Chihuahua to Los Mochis, and through the Copper Canyon. Actually, it’s a series of four canyons, which are as a much as 1,000 feet deeper than the Grand Canyon in Arizona.

At any rate, I stopped halfway through the trip and spent a night in the town of Creel and arranged for a tour of the local area the next day. At the appointed hour, a battered van arrived in the parking lot of the little hotel and the driver hopped out. He introduced himself as Polo and, since I was the only passenger, he ushered me into the front seat next to him.

The streets of Creel are paved intermittently, but Polo took off at a bone-jarring pace, expounding all the while about the thrilling sights that were in store. Mercifully, we soon reached a major road, where Polo gleefully stomped on the accelerator and sent us rocketing off toward what he assured me would be the highlight of my entire trip.

Ten minutes later we slid to a halt at the side of the road and Polo leapt from the van. As I climbed out, I saw a look of triumph on his face as he pointed dramatically across the road.
I stared, but saw nothing but boulders and pine trees. Finally, I turned to Polo for help.
He was still pointing, but his expression had faded to one of some anxiety. “An elephant!” he said. “An elephant of rock. Just there!” 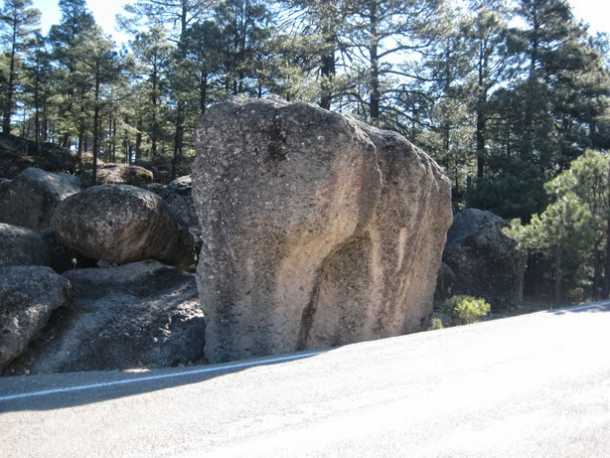 I looked again and . . . sure enough, one of the larger boulders gradually assumed the form of an elephant.
I dutifully snapped a photo, and after what seemed an appropriately respectful amount of time, we climbed back into the van to continue our tour of Creel and environs.
It consisted of several more rock formations and a brief stop at the home of one of Polo’s friends for “a beer”. It was a hot day and that had sounded wonderful, but the beverage turned out to be a pale brown liquid extracted from corn and ladled into a stained glass from a plastic bucket.
Polo got me back to the hotel in time to catch that day’s train and the remainder of the journey, all the way to Los Mochis, was . . . well, spectacular doesn’t adequately cover it. I absolutely recommend it, but would urge going through an experienced company specializing in that train and in that area. Most especially, let them recommend any side tours. But skip the elephants.