Jim Loomis December 10, 2013 Amtrak, Long-Distance Trains, Lounge Cars, Most Scenic Train Rides 20 Comments
What’s my favorite Amtrak train ride? That’s the question I’m most often asked, and it’s very hard to answer. For instance, I can’t imagine a more spectacular ride than the Adirondack running though up-state New York en route to Montreal at the height of the Fall colors.
And there is very little in this world that gives me the kind of happy glow I get while contemplating what I’d like for breakfast and sipping a Bloody Mary in the Pacific Parlour Car on the Coast Starlight.

But month in and month out, there’s no doubt in my mind that the California Zephyr traverses Amtrak’s most scenic route. I offer the following as evidence in support of that statement. 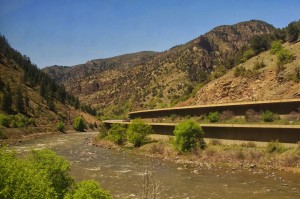 The Zephyr about fifteen minutes before its stop at Glenwood Springs, Colorado.  It’s easy to see why that highway was so controversial, isn’t it! 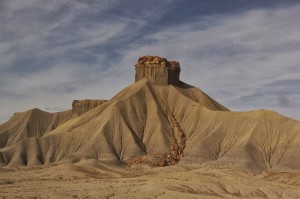 A spectacular rock formation in Nevada. Is that big enough to qualify as a mesa? I dunno. 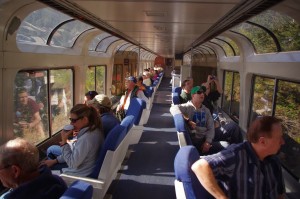 The lounge car is the place to be for the best view of … well, of everything. 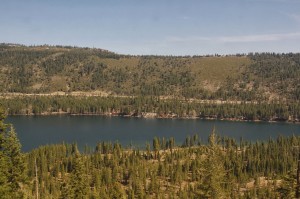 The Zephyr passes Donner Lake as it climbs through the Sierra Nevada mountains just an hour after crossing into California.
These were just a few of the photos I dug up, but I think they’re good enough to support my opinion that, if it’s amazing scenery you want, the California Zephyr is definitely the train for you.

Previous Counting Up the Miles on Amtrak and VIA Rail.
NextA Few More Interesting Scenes from the Photo File