To See or Not to See, That Is The Question.

Jim Loomis August 17, 2013 Australia, Europe, Siberia, Train Travel Advice 0 Comment
It’s always a hard choice for me, when I’m traveling: Do I join a group of strangers for a tour of a town or a cathedral or a chateau? Do I strike out on my own? Or do I relax in a nearby cafe and just watch the day go by with help first from several espressos, then from a few glasses of the local wine. I travel well by myself and for years I instinctively passed up the guided tours in favor of the latter two options.
Then, several years ago, I was in Sydney and had a free day before leaving on Australia’s wonderful trans-continental train, the Indian Pacific. On an impulse, I took an all-day bus tour out to the Hunter Valley, a well-known wine producing area. There were interesting people on the bus, the wineries were generous with their samples, and I thoroughly enjoyed myself.
Two years ago, on my way to Moscow for my train ride across Siberia, I stopped in Berlin for two nights. In the lobby of my hotel, I happened to pick up a brochure for “A Walking Tour of the Third Reich”. The next day, at the appointed hour, I set off afoot with another dozen or so people, led by an extremely well-informed guide who, curiously, spoke with a thick Scottish accent. 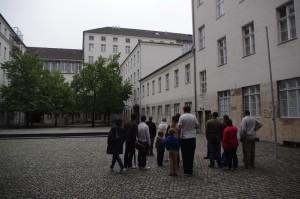 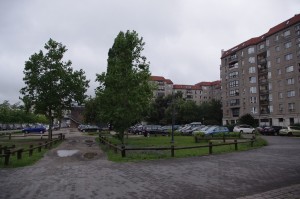 Highlight Number Two was the site of the bunker in which Hitler took his own life. As you can see, today it’s small, non-descript parking lot, deliberately left so lest the radical right-wing neo-Nazis in Germany (yes, they still have some of them there) turn the place into some kind of perverted shrine.
Now, whenever time permits, I do take tours of the interesting places I visit. Of course, a lot depends on the other people taking the tour. Years ago – I wasn’t more than 9 or 10 years old – my late Aunt Bobby took me on a bus tour of Boston. At one point, the bus driver was talking about the lanterns placed in the belfry of Old North Church as a signal to Paul Revere waiting across the Charles River. A woman in the back of the bus raised her hand and said, in almost a quarrelsome tone, “Well, how could he see those lights with all these tall buildings in the way?”

Previous Planning a Trip Abroad Take a Lot of Visualizing.
NextAmtrak and Airports … and a Little Bit About a LOT of Luck.