Jim Loomis May 08, 2013 Amtrak, Conductors 0 Comment
At the rate of about one-a-day, collisions occur between cars and trains somewhere across the U.S. There are two absolutes when it comes to these incidents: (1) every one if them is avoidable, and (2) the train always wins.
In addition, there are a tragic number of injuries and deaths when people walking on train tracks are struck by trains. The victims of these tragedies are almost always suicides, drunks, or kids listening to loud music through their ear buds. Amtrak’s southbound Coast Starlight encountered one of those last night about 3:00 a.m., not more than a minute or two after we had departed from Klamath Falls, Oregon. 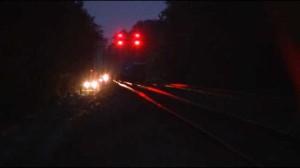 I happened to be awake at the time. The train was still gathering speed when I felt the sudden braking and we came to an abrupt stop. I carry a scanner with me on my train travels … a radio device that tunes into the radio frequencies used by the train crews. Most of the time, the conversations you hear are routine and uninteresting. But not last night.

The engineer reported to the conductors that someone had suddenly appeared out of the darkness and dashed in front of the train. He — that is, the engineer — was “90 percent sure I hit the guy.” One of the two conductors then undertook the grim task of walking the length of the train looking for the individual who would no doubt be injured or, more likely, dead. The conductor even continued the search beyond the last car for a quarter mile. By that time, the local police had arrived and joined in the effort.
And they found nothing.
After consulting with the local police and with the Union Pacific Railroad’s dispatcher (the Coast Starlight operates over track owned by the UP), the conductor radioed the engineer, “Well, I guess we missed him. Let’s highball, Number Eleven.”
“Highball,” acknowledged the engineer.
And the Coast Starlight continued on its way south to Los Angeles.