Amtrak to FRA: Cut Us Some Slack on the New High-Speed Trains. 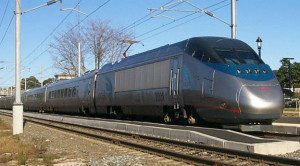 Amtrak wants to replace the high-speed equipment – the Acela trainsets – now operating on the Northeast Corridor between Washington and Boston via New York City.
The first Acelas began service in 2000 and, given a “shelf life” of 20 years or so, it’s indeed time for Amtrak to be thinking about new equipment. It’s a complicated and time-consuming process, after all.  Designs and specifications have to be decided and bids solicited from various manufacturers. Then the new trains have to be built and put into service. In the meantime, planned improvements to the infrastructure must also be underway.
Ah, but an interesting bureaucratic tussle may be in the offing.
The first time around, the Federal Railroad Administrationwas concerned about the possibility of high-speed collisions and they required the new Acelas to be a lot stronger structurally than the trains operating in France and Japan and in other countries. So the Acelas ended up a lot heavier than originally planned.
Unfortunately, that meant they couldn’t accelerate as fast as, for example, the French TGV equipment. All that additional weight also meant Amtrak’s new trains needed bigger more powerful breaking systems. And, of course, the other unpleasant result of the FRA’s edict was that they cost a lot more, too.
This time, given an outstanding safety record and major improvements planned for the infrastructure, Amtrak wants to avoid all those earlier problems by buying the lighter conventional equipment … essentially off-the-shelf trainsets, the same as those being used on high-speed systems elsewhere in the world. And that, of course, would save Amtrak a great deal of money.
So, for all those reasons, Amtrak is asking the FRA to revise those heavy-duty standards and permit them to buy new trains that are much lighter than the current Acelas. It’s not official yet, but it’s a safe bet that NARP, the National Association of Railroad Passengers, will support Amtrak’s position. Who knows how the FRA will respond. But – never fear – I’ll let you know.

Previous Surf’s Up in Hawaii … WAY Up!
NextEuropean Trains Take You from Point A to Point B … and to C and D and E, too.