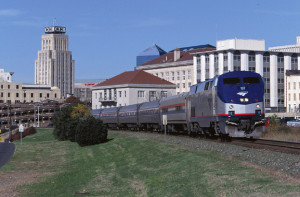 Transportation experts are talking about a significant trend happening little by little around the country: the airlines are cutting back or eliminating short-haul flights … that is, flights of 400 miles or less.

The cost of fuel is one reason, but there’s also a looming shortage of pilots. And – get this! – there is also increasing competition …from trains!
I’ve just been sent some recently published ridership numbers comparing rail vs. air travel between some major U.S. cities.
Most people know that Amtrak is now carrying more people between New York and Washington than the airlines.  But did you realize Amtrak’s share of that market is now 77 percent?
And 69 percent of the people using public transportation to travel between Seattle and Portland choose Amtrak’s Cascade service instead of flying. Back in the midwest, Amtrak’s market share between Milwaukee and Chicago is now 89 percent.
Rail advocates and public officials are paying a lot of attention to the Chicago-St. Louis corridor.  Extensive track work (paid for with stimulus funds) is reducing the train travel time between those two cities and already ridership is increasing dramatically as a result. Most recent numbers show that 29 percent of travelers now choose the train instead of flying and those numbers are expected to keep going up.
When the new Congress meets after the first of the New Year, NARP (the National Association of Railroad Passengers) will be using those numbers to help make the case for more and better and faster trains. Let’s hope the members of Congress, especially the newly-elected ones, will be impressed. They sure as hell ought to be!

Previous Tips on Traveling in an Amtrak Roomette.
NextWhy Are We Still Arguing Over High-Speed Trains?