When You Work for Amtrak, Having a Plan B is Essential.

Jim Loomis October 26, 2012 Amtrak, Dining Cars, Lounge Cars, Sleeping Cars 0 Comment
A steward in a VIA Rail dining car once remarked to me that “you gotta be flexible to work for a railroad.”

Case in point: On Wednesday morning, I boarded Amtrak’s Sunset Limited in New Orleans for the two-night journey along the southern border of the U.S. to Los Angeles.

Just three or four minutes after departing New Orleans, the train stopped and one of the conductors got out to quickly check the valves on the tank that supplies water to the dining car. He found nothing wrong, but did quickly come up with a reason why the diner apparently had no water: the gauge on the car’s water tank said EMPTY.

According the one of the car attendants, the conductor then requested permission – I’m not certain from whom – for the train to back into the station so the diner’s water tank could be filled. Permission was denied, so the Sunset proceeded on its way. 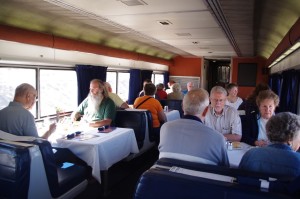 ﻿Of course, with no water for making iced tea, for washing pots and pans and tableware, not to mention hands, and for cleaning up after meals, there could be no meals served in the diner until the car was watered and the soonest that could happen would be when the Sunset reached San Antonio … at midnight!

That set our industrious crew to scrambling. Coach passengers would make do for the rest of the day with fare offered for sale at the snack bar in the lounge car. But since meals are included in the fares paid by sleeping car passengers, it was up to Amtrak to see that some 40 of us in the New Orleans sleepers were fed.

So calls went out to caterers up the line. Sure enough, boxed lunches came aboard when we reached Lafayette, Louisiana, at 12:30 and dinner appeared 10 minutes after we were scheduled to depart Houston at 7:00 p.m. (Since the caterer had clearly known about the order for almost the entire day, you could almost hear our car attendant’s teeth grinding.)

The diner finally got it’s watering in San Antonio and the next morning everything was back to normal: the dining car crew bustling about their duties and I happily tucking into an order of scrambled eggs, bacon, grits and a croissant.

But you surely do “gotta be flexible” if you work for a railroad.

Previous Lots of Ways to Earn Free Travel, Including on Amtrak.
NextIt Really Is a Small World After All.