It’s interesting and frustrating that so many candidates for federal office continue to denigrate rail travel in general and Amtrak in particular. Makes you wonder how someone can aspire to serve the public while advocating the opposite of what the public is demanding.

(In an effort to remain as non-partisan as possible, I am doing my best to not mention Mitt Romney by name.) 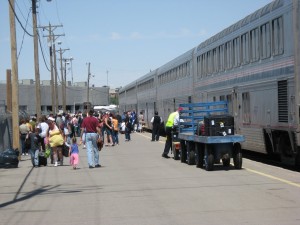 Virtually all transportation experts agree that eliminating Amtrak’s federal subsidy would almost certainly mean the end of most of Amtrak’s long-distance service across the country. Yet the roughly $1.4 billion that Amtrak has been getting every year is a tiny faction of one percent of the federal budget anyway. It is, in fact, less than the U.S. gives every year in foreign aid just to Egypt!

While some politicians continue to talk of killing off Amtrak, I am constantly finding links to news stories reporting grassroots citizen campaigns for more and better rail service.

Cities and towns across the Florida panhandle are joining in a campaign to restore Sunset Limited service between New Orleans and Orlando.

A study is underway to look into new rail service linking Shreveport, LA with Dallas and Fort Worth.

Communities in Colorado or upset that because of poor track conditions, Amtrak’s Southwest Chief might be rerouted and bypass their towns.

And several communities in Iowa are asking that existing Amtrak routes be extended in order to provide rail service for their citizens.

What’s up with that? The people are speaking … how come the politicians aren’t listening?