No Breaks for Passengers … Except in China, Where They Break Your Head.

Airlines continue to find ways to squeeze more money out of passengers … or just to make it more difficult for us to be sure we’re getting the lowest possible fare.

You are no longer able to find any American Airlines flights on Orbitz, for example. If you’re going to or through Atlanta and are looking for cheapest fares on CheapOAir.com, you won’t see any Delta flights listed, and Atlanta is Delta’s main hub. And Southwest has refused to list any of its flights on any web site but its own. 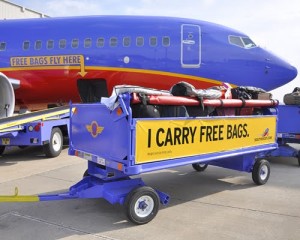 And, speaking of Southwest, they are running television commercials ad nauseum trashing other airlines for charging fees for checked bags and claiming that “bags fly free on Southwest”. Well, yeah … unless, of course, your bag is bigger and heavier than Southwest thinks it ought to be. Then they’ll charge you a fee just like all the other airlines.

But, as much as we all complain about the way US airlines are treating us, it could always be worse. Take, for example, the case of a middle-aged male passenger on a Chinese train operating in Jiangxi Province. According to news reports, the man apparently became involved in trying to break-up a dispute involving another passenger and, for his trouble, was beaten so badly by members of the train crew that he died. I wonder if his next-of-kin got a refund for the cost of his ticket.

Conductor: “When you call me that, smile!”

Previous Here It Is: My Biggest Complaint with Amtrak.
NextIt’s Way Past Time to Reconsider Our Priorities.