In hindsight, I didn’t allow enough time for Shanghai. There is just too much to see and, understandably, visitors are taken by the incredible, even breathtaking architecture of the soaring, modern skyscrapers in the Financial District. 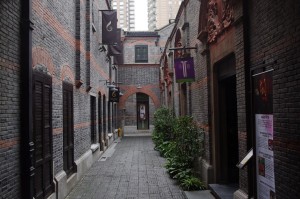 Given more time, however, I would have liked to seen more of the traditional old parts of the city that are still around. My cousin, Steve Grace, has written an absolutely marvelous book about this city, titled simply and appropriately, Shanghai, and he spends a lot of time exploring these old parts of the city and the unique and traditional lifestyle of the people living there. 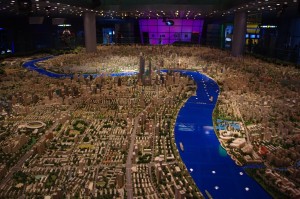 This is an exact scale model of almost the entire downtown Shanghai area. Clearly, the city government has focused a great deal of time, effort and money on urban planning and redevelopment. They have done miraculous things in a very short time. Of course, they have a huge advantage … no NIMBYs to slow things down. Typically, people living in older neighborhoods will simply be served notice that their block has been scheduled for redevelopment and they have three weeks to get out. (Not to worry, though … the government has a brand new 500-square-foot apartment on the 40th floor of a high-rise tower reserved for you. It comes with a washing machine and a dryer. You’ll love it.) 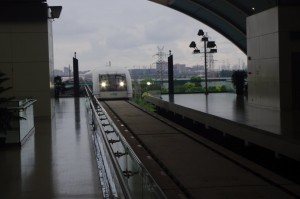 The final rail link in my itinerary was the shortest, but also the fastest: the magnetic levitation (maglev) train that carries passengers from downtown Shanghai to Pudong International Airport. It’s a 20-mile trip that takes just seven minutes. The top speed I noted on the way out to Pudong, according to the digital display in the front of each car, was 431 km/h, or 268 miles per hour. 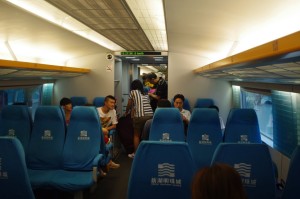 Given my very limited understanding of the maglev technology – using the opposing force of huge magnets to lift the train off the track and propel it forward – I was expecting an almost silent and very smooth ride. It was neither. It produced what is best described as a rumbling sound that was, in fact, noisier than the high-speed train I took from Beijing to Shanghai. And the ride was rough enough so that I had to grip a seatback to stand up when we were moving at top speed. 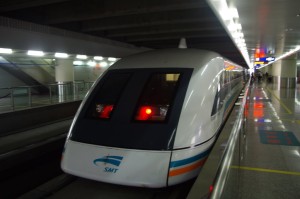 Still, at least for an advocate of more and better trains, it’s a thing of beauty. And without doubt, it’s a technology with tremendous potential. For me, it was a fitting conclusion to my rail travels that started a month earlier in London.

The final stretch of my ‘round-the-world journey would all be by air: first from Shanghai to Seoul on Korean Airlines, then home in two hops – eight-plus hours from Seoul to Honolulu and the 22-minute hop from Honolulu back home to Maui – both on Hawaiian Airlines.

But there was still time for one final, brief and very scary adventure.

Previous Ride a bicycle? Now there’s a bulls-eye on YOUR back!
NextA Close Call … Or how I almost spent 10 days learning Korean and eating kimchee.