Coming Up: The Ultimate Rail Journey

For most rail enthusiasts, the Trans-Siberian Express – covering 5,753 miles from St. Petersburg through Moscow to Vladivostok – is the ultimate train travel experience. It’s certainly been on my must-do list for years. 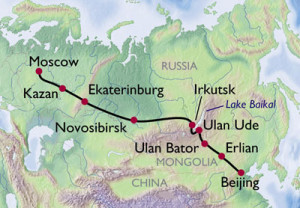 In less than two months, I’ll be taking off for an extended rail journey and a version of the venerable Trans-Siberian route is included: St. Petersburg and Moscow for the start, but switching to the Trans-Mongolian line in Ulan Bator and going south from there to Beijing.

Interestingly, Russian trains run on wider track than the standard width between rails found most everywhere else in the world. Russian gauge is 4 feet, 11 5/6 inches, which is about 3½ inches wider than standard gauge. The original idea behind the extra-wide gauge was to make it difficult for invading armies to transport their military machines and hardware into Russia by rail. 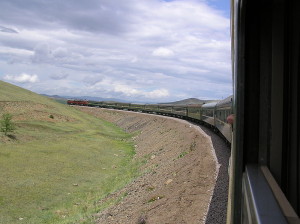 At any rate, according to Mark Smith, the Man in Seat 61, the Moscow-Beijing route is more scenic and more interesting than the traditional one to Vladivostok. This photo from Wikipedia is the Chinese train in the Gobi Desert.

From Beijing, I will be taking the brand new Chinese high-speed train to Shanghai. How new is it? Its inaugural train is due to run sometime this month. Finally, and in one way the highlight of the trip, I’ll take the world’s only regularly scheduled magnetic levitation (maglev) train on the brief but very fast ride from downtown Shanghai to Pudong, their international airport, for my flights home.

And, yes, I’ll be taking my laptop along and, as time and internet connections permit, will post here about my experiences along the way.