In Spain the Brain Is Mainly On the Train

The knee-jerk anti-anything-government ideologues in this country continue to insist that money spent on passenger rail is wasted. They’re full of crap.

(Yes, I’m cranky. I’ve pretty much lost patience with people who are so locked into their own view of the world that they refuse to accept as fact the proven experience of other people in other countries … be it passenger rail or health care or climate change.)

Anyway, what about the argument that even after they begin running, people won’t give up flying or driving their own cars for these fast new trains? 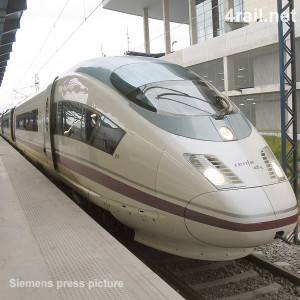 Well, Spain has linked most major cities with high-speed rail and the Spaniards have accepted these fast new trains in a very big way. Take the 325-mile run between Barcelona and Madrid. Two years ago, 90 percent of the people flew between those two cities. Not any more. Today, AVE (Alta Velocidad Espagnola), the Spanish high-speed rail system, is carrying more than half of the passengers between those cities. A trip that takes 6 hours by car, is now covered by rail in 2 hours and 38 minutes. 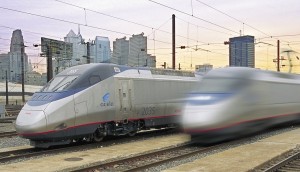 Here in the U.S., Amtrak is carrying half of the traffic between Washington and New York even though their high-speed Acela trains aren’t nearly as fast, averaging just under 90 mph along that route.

Another argument we keep hearing is that high-speed rail may work in Europe, but the U.S. is too large and our cities too far apart for it to be successful here. Puh-LEEZE!

The LA-to-San Francisco high-speed line is well into the planning phase and the 432 miles between those cities will be covered in just 2 hours and 38 minutes. Can you make that trip — from city-center to city-center — by plane in just over 2 ½ hours? No way!

In most cases, the precise routes for other city-to-city corridors have yet to be determined, so I’ve used driving distances for the following illustrations. I’ve also assumed a conservative average speed of 150 mph for the high-speed trains. Therefore, these numbers are approximate, but still more than enough to prove the point:

Of course, logic and facts have never deterred the anti-rail crowd. The challenge for the rest of us – and for rail advocacy organizations like the National Association of Railroad Passengers (NARP), is to keep knocking down their phony arguments so the vast majority of folks are well-informed on this critical issue.

Previous When the Numbers Lie, Bad Things Can Happen.
NextOne Way to Think About Global Warming