Our just-completed 12-day junket included three separate train rides. The first, aboard Amtrak’s Southwest Chief, originated in Los Angeles with an early evening departure and concluded the next morning around 5:00 at Flagstaff, Arizona. 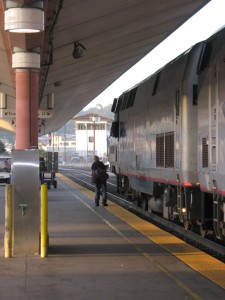 This lucky fellow is the Amtrak engineer about to climb up into the head end of Train # 4 that will take us to Flagstaff. As part of the research I did for the first edition of my book, the Amtrak people arranged for me to spend several hours up in the head end of the Empire Builder between Milwaukee and Winona, Minnesota. You know how many of us wanted to be railroad engineers when we were kids? Well, we were right! 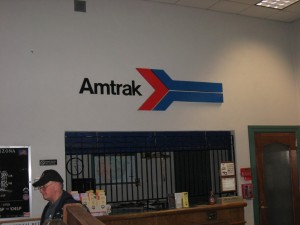 How strapped has Amtrak been over the years? Note the logo on the wall in the Flagstaff station. Referred to derisively by some as “the pointless arrow”, it should have been replaced five or six years ago by the new logo. The station agent told me that he requests a new logo every year, but there has never enough money for small “non-essential” requests like that. 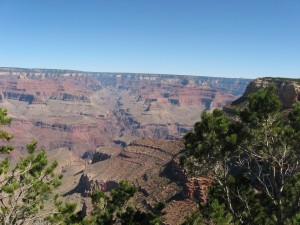 We picked up a rental car in Flagstaff and drove to the South Rim of the Grand Canyon. I took more than 50 photos and not one begins to do it justice. It is just too damn big! 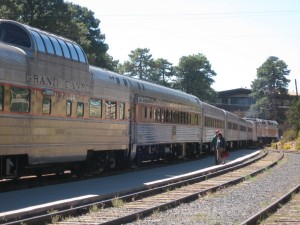 The Grand Canyon Railway operates a round trip to the South Rim every day from Williams, Arizona. We had booked it well in advance but, regrettably, decided at the last minute to cancel. It was just a great deal easier to rent a car in Flagstaff, have it for our use during our time at the Grand Canyon, and then be able to take off for the other national parks on our list directly from there. But I am resolved to take this train the next time!
From here we headed to Moab, Utah, for our visits to Monument Valley and Arches National Park. Photos in the next post.