Italy plans to introduce high-speed rail service between Milan and Rome next year, reducing the 360-mile trip to a flat three hours … that’s an average speed of 120 mph, including whatever stops will be made en route. 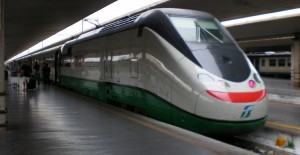 The Italian state railway, Trenitalia, says they expect to take 60 percent of all traffic between those two cities, and that includes both air and automobile traffic. This is not good news for a group of Italian businessmen who are trying to get the bankrupt national airline, Alitalia, back into the air. But it’s certainly a sign of the times.

The question is, can we learn from the Italians, the French, the Germans, etc., etc., etc. that linking major cities with high-speed trains is the way to go for the future. With billions of dollars about to be poured into America’s infrastructure, now is the time!