The Metropolitan Lounge in Chicago’s Union Station is reserved for Amtrak’s sleeping car passengers and that’s where I’m waiting to board my connecting train to Seattle, the Empire Builder.

That’s also where I get the bad news: There has been severe flooding along the Mississippi River in Wisconsin and the Empire Builder is unable to get all the way to Chicago. As a result, Amtrak is going to bus us from here to St. Paul where the train will be waiting. It will be an eight-and-a-half-hour bus ride. Ugh!

I hate buses and immediately start looking for any reasonable option. Out comes the cell phone and moments later I’m speaking to a Northwest Airlines reservations agent. Yes! They have a flight this afternoon. And yes! The flight is a quick 90 minutes. And yes! They have one seat left on that flight. For $366! 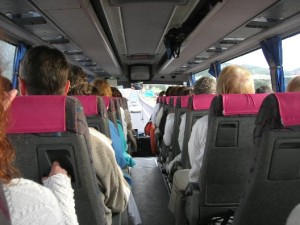 And so, at a few minutes past 2:00, I find myself climbing aboard an Amtrak bus, resigned to a long, boring, barely comfortable ride. Moments later, a young man politely asks if the seat next to me is taken. He’s casually but neatly dressed, obviously well-mannered, and – most important – is not the 300-pounder I was dreading.

Ten minutes later we’re underway, although the first 45 minutes of the trip finds us bogged down in bumper-to-bumper traffic, creeping along on our way out of Chicago. Happily, that time passes quickly because my seatmate turns out to be an interesting chap. Just graduated from a pre-med curriculum at Wesleyan University, he’s spending the summer traveling around the country looking at medical schools. And he’s doing as much as he can by train. 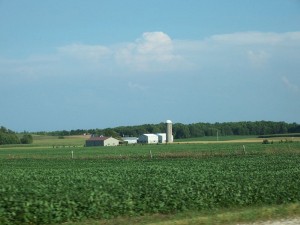 Soon we’re rolling along, headed north through lush green farmland. Between some good conversation with my new friend and a good book, the long trip passes almost pleasantly, although we never do see any signs of the flooding that has caused this bus ride.

The Empire Builder is waiting for us when we arrive at the Minneapolis-St. Paul Amtrak station at 9:40. We won’t be leaving for another two hours and by now I’m hungry. The dining car will not be serving tonight, but the station master tells me there are a couple of fast food joints a hundred yards down the road. Off I go.

The first place I spot is a Subway which, I discover, is staffed by a young man who is the polar opposite of my seatmate on the bus. He is unkempt, greasy, and is a living, breathing portrait of incompetence and disinterest. We have a less than promising start:

Him: You want lettuce on it?

After clearing that up, he set to work and I detoured to the rest room. To my surprise, the sandwich was ready, wrapped and bagged with my drink when I emerged. I paid and walked back to the station, settling into a chair in the far corner of the station to await the Empire Builder’s “All Aboard.”

Time for the BLT … my favorite sandwich … and by now I’m really hungry. Problem: My BLT has no lettuce and no tomato. Just bacon. And, of course, cheese.

Nevermind. The Empire Builder gets underway at 11:30 and, hungry or not, I’m once again settled comfortably in my roomette … a happy camper.

Previous Sometimes There Really Are Simple Answers
NextGrown-Ups Take A Stand, But Kids Pay The Price