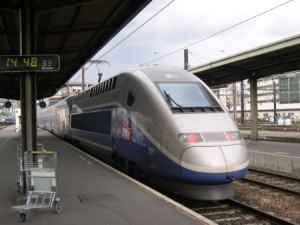 Transferring from one train to another is quick and easy in Europe. The last time we were in France, we had three-minute connection between trains. I think it was in Dijon. Three minutes! I was worried, but when we pulled into the station, the other train was waiting right across the platform. We made the connection with two minutes to spare! That would be unheard of in the U.S.

Missing a connection with one of Amtrak’s long-distance trains is a big problem because most of them run daily, meaning the next train won’t be along for 24 hours. (Two Amtrak trains, the Sunset Limited and the Cardinal only run three days a week.)

Connections are faster and easier along the Northeast Corridor between Washington and Boston because Amtrak owns the track. Almost everywhere else in the country, however, Amtrak trains run on track owned by the various freight railroads. Any delays – usually because of work being done on the track or heavy freight traffic – are out of Amtrak’s control. 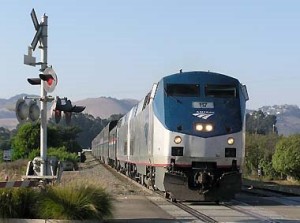 As an example, as recently as a year ago, it was not uncommon for Amtrak’s Coast Starlight (above), which runs daily between Los Angeles and Seattle, to be three, four or five hours late. Sometimes even more. Fortunately, things have improved dramatically and most long distance trains have been running a lot closer to their schedules.

Nevertheless, Amtrak trains can still be late, so when putting together a rail itinerary, be very careful about connections. Remember that the greater the distance the arriving train has had to travel, the greater the possibility it will be late.

The fool-proof approach is simply to stay over night in the connecting city. If that’s not possible, be sure to consult in detail with the Amtrak reservations agent or with a rail-savvy travel agent about any connection before finalizing your booking.

Finally, you can check on the recent history of delays for any Amtrak train, by going to this web site.

Previous Stubborn, Stupid and Selfish
NextSome People Get It. But What About the Others?