The Mystery of the Sunset Limited

Everyone knows about the devastation Hurricane Katrina brought to New Orleans and other areas of the Gulf Coast in August of 2005. The terrible storm also caused considerable damage to the rail infrastructure skirting the Gulf of Mexico from Louisiana to Florida. Freight traffic was disrupted for months and Amtrak was forced to suspend thrice-weekly service by the trans-continental Sunset Limited between New Orleans and Orlando, Florida. Since the storm, the train only runs between New Orleans and Los Angeles.

It’s been more than 2½ years since Hurricane Katrina. The CSX rail lines have been repaired and freight traffic is once again moving. But Amtrak still has not restored Sunset Limited service between New Orleans and Orlando. The big question is: Why not?

Certainly it can’t be because no one wants to ride the train over that segment. Unofficial reports claim that nearly 45% of the Sunset Limited’s revenue originated from that part of the route, about one-third of the total mileage. 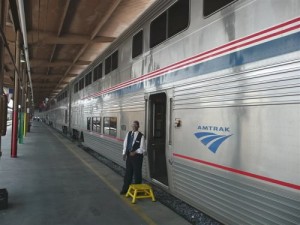 Furthermore, it would seem that rail travelers in that part of the country are getting restless. A grassroots advocacy group, the Sunset Marketing and Revitalization Team (SMART), was formed early this year for the very purpose of pressuring Amtrak to restore that portion of their service and to encourage other improvements to the train’s operation.

At a SMART meeting held just a few days ago in New Orleans, a representative of Amtrak would only say that the railroad “does not encourage Florida service at this time.” So Amtrak is apparently discouraging an organization established to encourage Amtrak. Huh?? 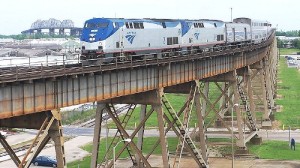 All that intrigue notwithstanding, it must be said that the Los Angeles-New Orleans segment of the Sunset Limited’s route – 1,995 miles, covered in 48 hours – offers a wonderful look at a unique section of the U.S. One of the more spectacular moments comes just after the train leaves New Orleans and crosses the Mississippi River on the Huey Long Bridge, 4 ½ miles long and 280 feet high.

(By the way, anyone who spends any time looking out the train window at the harsh landscapes and rugged terrain on the way to California will realize that building a 20-foot-high wall along our border with Mexico is an absolutely crazy idea.)

That said, there is no doubt that the Sunset Limited – even the truncated version – is a glorious ride through some of America’s most varied and fascinating scenery. I’m taking that trip in mid-June and am planning at least one post in the near future covering this train and it’s route in some detail.

Previous Do Not – Repeat: DO NOT – Miss Your Connection
NextAbout Hawaii and Europe and Jet Lag