Across Canada in a VIA Rail Sleeper.

VIA’s western trains–that is, trains operating west of Toronto–use the classic single level stainless steel cars built in the 50’s and lovingly restored and refurbished. Sleeping car passengers enjoy lounge cars with a viewing dome, dining cars, and the classic bullet-ended Park cars, each one named for one of Canada’s national parks. In addition to their own dome, Park cars also have a lounge area, plus a deluxe bedroom (more about that follows) and one handicap accessible suite.


Each of the standard sleeping cars in the stainless steel fleet (referred to as “Manor” cars) has a maximum capacity of 22 passengers: four roomettes for solo passengers, in which the bed folds down from the wall, plus six double rooms featuring upper and lower berths. There are also three “sections” in each sleeping car, with facing seats during the day that convert to upper and lower berths at night. Privacy is achieved by heavy zippered curtains. (Think “Some Like It Hot” and the hilarious scene with Jack Lemmon and members of the all-girl band.) Each car has one shared shower.

VIA uses what they call “Chateau” sleepers on the train they operate from Winnipeg north to Churchill on the shores of Hudson Bay. The interior configuration is different from the Manor cars, but they’re certainly just as comfortable. Each Chateau sleeper has eight singles, three doubles, one triple room, and three sections.

With the exception of the sections, all of VIA’s sleeping car accommodations include en suite toilet facilities The only quirk to note is in the single roomettes in both the Manor and Chateau sleepers: when the berth is lowered, it rests on and covers the toilet. Not a big deal: If, like me, you invariably have to use “the facilities” in the middle of the night, you just get out of bed, release the latch that holds it in the “down” position, and raise it up half way. (Just don’t forget to secure the latch before climbing back into bed!)


Some of the sleepers and Park cars used on VIA’s premier train, The Canadian, (Vancouver-Toronto) have been renovated–VIA calls it “Prestige Class–and passengers opting for this new service enjoy actual suites, each with a sitting area and a full-sized double bed that folds down from the wall. 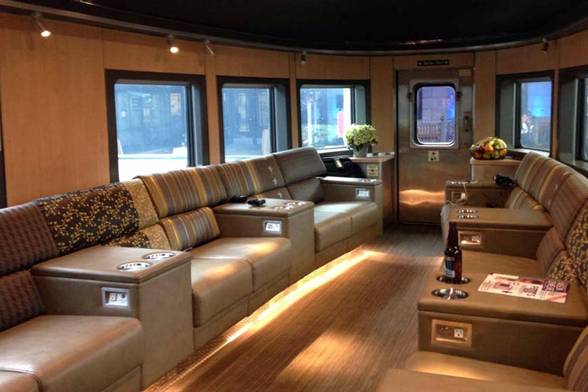 I confess to having indulged myself on VIA’s superb transcontinental train more than a half dozen times over the years. Now the renovated suites and the refurbished lounge area in the Park cars (photo above) provide a brand-new excuse for doing it again!

Finally, please note that through the end of 2016 members of NARP, the National Association of Railroad Passengers, will be given a 10% discount on both the rail fare and the sleeping car accommodations on all VIA trains. (Note, please, that the discount does not apply to the Prestige Class accommodations.)