The Cardinal Is One of Amtrak’s Most Scenic Rides

I’m a third of the way through my return to the West Coast, currently on a one-day stop in La Plata, Missouri. This small town is the site of what is planned to be an impressive and extensive railroad-themed facility called the Silver Rails Resort. More about that later after I’ve had a chance to look around.

In the meantime, I had another opportunity to take what has to be one of Amtrak’s most enjoyable trains, the Cardinal. It runs three-days a week in both directions between New York City and Chicago. I boarded in Baltimore for the westbound run. 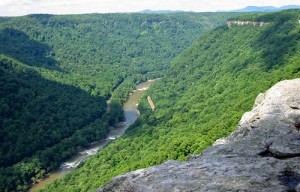 After almost an hour’s stop in Washington, the Cardinal swings southwest and begins a very scenic run across Virginia and West Virginia, over the Blue Ridge Mountains and the Allegany range, then winding through the amazing New River Gorge. You can see the train tracks along the left bank of the gorge in the photo above.

There are two other options for traveling to Chicago from major East Coast cities — the Lake Shore Limited from New York or Boston, or the Capitol Limited from Washington – but the Cardinal offers a wonderful and much more scenic option.

The one drawback is that this train doesn’t operate daily, and the thrice-weekly schedule can make connections awkward or expensive, if the Cardinal’s schedule means having to overnight in Chicago. True, there has been talk of making the Cardinal a daily train but, once again, Amtrak’s shortage of equipment becomes the major obstacle.

As it is, there is only one sleeping car on the Cardinal and several of the rooms are necessarily occupied by crew members. And – the law of supply and demand at work – the cost of a roomette on the Cardinal can be as much as double that of a roomette on the Capitol Limited.
Nevertheless, it’s a glorious trip and I recommend it enthusiastically. One caveat: I think the eastbound trip is preferred because you’ll spend more time passing through the New River Gorge during daylight hours than when coming from the other direction.

Either way, however, the Cardinal is a wonderfully scenic rail journey and should be on every train traveler’s bucket list.