Got a Problem? Let’s Make it Worse!

I can’t remember where or how I happened to come across this photo, but it certainly illustrates the monumental stupidity of this country’s approach to transportation. It’s the Katy Freeway in Houston, Texas, and at this particular spot, it’s 26 lanes wide. That includes six lanes in each direction, plus feeder lanes. 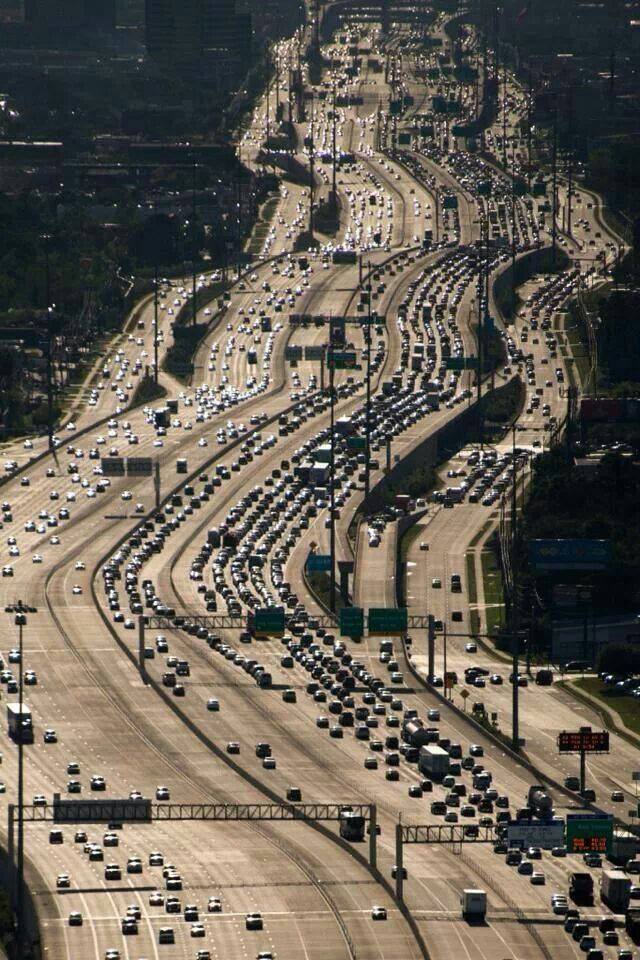 The government officials who permitted this monstrosity to be built should have been run out of office for malfeasance. How could we permit something like this to exist? What a waste of precious land … of green space. In addition to the billions of dollars to construct the damn thing, the cost to the taxpayers doesn’t stop In fact, it never stops because all the property tax revenue that would have been generated by these hundreds and hundreds of acres of land will be lost forever to the cities and towns through which this and other freeways pass.

I’ve traveled all over Europe–in France, Italy, Germany, Hungary, and Scandinavia–and have never seen anything remotely like this monstrosity.

And then there’s this freeway interchange in Los Angeles, which has four levels, with entrances and exits in both directions. Urban freeways can cost as much as $75 million per lane/per mile and interchanges can cost hundreds of millions of dollars, just to transition automobile traffic from one freeway to another.

But according to the people who figure these things out, the population of California will increase dramatically over the next several decade,anywhere from 25 to 40 million more people. Do we keep adding more lanes? Building more interchanges? Providing more parking? When do we stop? When do we begin to provide public transportation: specifically passenger rail: mass transit, commuter trains and long-distance trains that provide affordable public transportation the way the Europeans have done.

It’s so damn obvious that’s what we need to do. Why won’t the people who are supposed to be leaders, do the responsible thing? The answer, I’m sorry to say, is because they are pandering to the ignorant and the uninformed. And generations yet to come will pay the consequences.

Maybe … just maybe … with organizations liken the National Association of Railroad Passengers carrying the torch, the U.S. will smarten up and turn to rail. We can only hope.

Previous A Golf Lesson From the Mayor.
NextBusiness Done and Heading Home.