MLB Brass Doesn’t Give a Damn About Hawaii.

Think that sounds a little harsh? Well, I don’t think you will after you hear our story.

Basically, we have two gripes, both of which have to do with Major League Baseball’s illogical and arbitrary blackout policy, specifically as it affects baseball fans in Hawaii. Here’s the short version:

There are six major league teams on the West Coast, located in Seattle, Oakland, San Francisco, Los Angeles (the Dodgers and the Angels), and San Diego. All six teams have claimed Hawaii as being within their “home market”. That designation triggers a blackout of all their games on television here … except on those occasions when one of their games happens to be televised nationally by Fox or ESPN. Mind you, since the blackout applies even when, for instance, the Dodgers are playing the Mets in New York City, a total of 972 games are potentially affected.

In other words, to see one of their games, we either have to get on a jet and fly to Seattle or L.A or wherever … or watch it on their LOCAL television station. 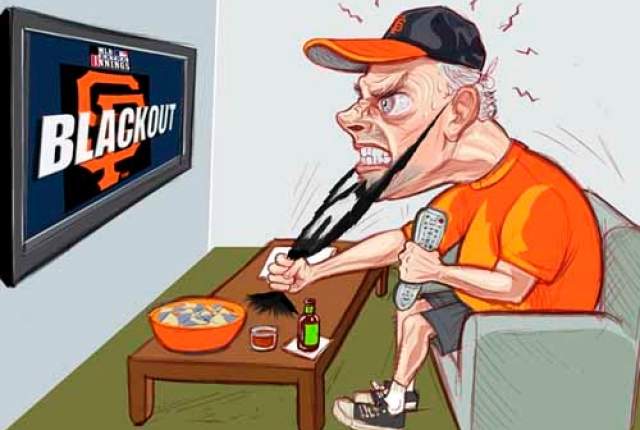 Of course, since we are, after all, something like 2,300 miles away from them, we can’t receive their local TV station’s signal. And, also of course, while some of us are able to fly to the west coast to see a game or two, that’s hardly a practical way to follow your team through a 162-game season.

But here’s another crazy aspect to this whole bizarre tale:

As I’ve noted, through my DirecTV package, I watch most of the Red Sox games on NESN. Typically, night games start at 7:00 p.m. in Boston, which is 1:00 in the afternoon here in Hawaii. The “live” game runs until 4:00 p.m. or so. As soon as the game ends, NESN edits the video down to two hours and the shortened version of the game, called “Sox in Two”, is re-broadcast starting at midnight Boston. But that’s 6:00 p.m. here in Hawaii, a much more convenient time for many of us who work during the day or have other activities that might make it inconvenient to watch the live game. But the rebroadcasts are blacked out! Yep … you got that right: It makes no sense whatsoever. We can see the games live at 1:00 in the afternoon, but the powers-that-be have decreed that the shortened, taped game shall not be viewed by baseball fans in Hawaii.

All of the above is frustrating and maddening. But here’s what’s really upsetting: a half dozen of us have been asking questions and looking for explanations for this absurd situation for five or six years. We’ve sent emails and written letters, but no one at Major League Baseball … no one with the Red Sox … and no one at NESN has bothered to respond. No-frickin’-body! No one cares enough to even offer some kind of half-assed explanation. Corporate indifference at its worst. And if that isn’t a sign of the times, I don’t know what is!