Following Amtrak in the News Is a Bumpy Ride.

The chairman of Amtrak’s board of directors, Anthony Coscia, appeared before a congressional committee earlier this month and said what needs to be said, often and loud: passenger rail needs a constant and predictable source of funding—in other words, a trust fund. Almost every year, for some 40 years, Amtrak has had to go before Congress and beg for money … and not a lot of money, though some would have you believe otherwise.
But how can any business do serious long range planning without knowing from one year to the next how much money it’s going to have?

A trust fund, into which money goes from a dedicated source, changes all that. Income can be predicted; plans can be laid; progress can be made! It’s a logical, sensible, businesslike solution to a problem that has been preventing Amtrak from doing what Congress has been demanding for all these years. So who’s been holding things up? Aw, c’mon … You know who!

*   *   *
I’ve written before about the terribly important case involving Amtrak that’s now pending before the U.S. Supreme Court. How important? The decision could well determine if Amtrak can continue to function as a viable public transportation option outside of the Northeast Corridor. Cutting through all the legalese and getting to the ultimate effect of the ruling, the court is going to decide whether or not the freight railroads can be required to give priority to Amtrak trains and run them on-time. NARP filed an amicus brief in the case. Here’s a really good, easy-to-read summary of what happened during oral arguments which occurred on the 8th of December. A decision is expected in June. 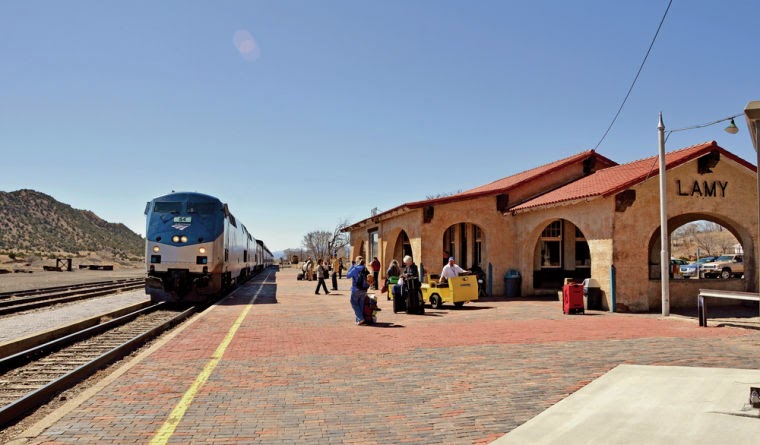 You want to know why being advocates for passenger rail in this country can make your head hurt? Here’s a great example.
Because some 200 miles of track in New Mexico has deteriorated, there’s a possibility that Amtrak’s Southwest Chief could be re-routed and no longer go through that state. The current route follows the original Santa Fe Trail for many miles and includes a stop at Lamy, NM, (photo above) which is just minutes by shuttle bus to Santa Fe, the state capital. New Mexico has been asked to pony up a pro-rata portion of the cost every year to bring the track up to standard. One estimate pegs that at $9 million.
New Mexico’s Department of Transportation has now issued a report saying that the state’s economy would take a $3 million hit every year if the Southwest Chief were to be re-routed. And that, in turn, caused a number of concerned citizens to wonder aloud (actually, on editorial pages) why the bureaucrats were unable to understand that by NOT contributing to the track repair project, the State of New Mexico would come out $6 million ahead.
Uh … but … you see … Oh, never mind.

Previous Another Ride on VIA Rail’s Train #2, the Canadian.
NextA Momentary Pause