Jim Loomis November 19, 2014 Amtrak 0 Comment
Everyone is aware of Amtrak’s on-time problem. It’s been going on for many months and has affected pretty much all of the long-distance trains. Significant increase in freight traffic has been given as the reason. But two trains, the Empire Builder and the Capitol Limited, have been hurt more than the others.
Of course in a perfect world, it makes sense for Amtrak to maintain good relationships with the various host railroads over whose tracks the passenger trains move. To put it another way, it’s clearly not a good idea to antagonize the people who decide whether your train or their train goes onto the siding to let the other one go by.
I suppose it’s conceivable that in private conversations between Amtrak executives and the people in charge at, say, BNSF, things might get a little testy at times. But as far as I can remember, all the concerned parties have been careful not to let that kind of stuff spill over into the media and become public.
Not any more. 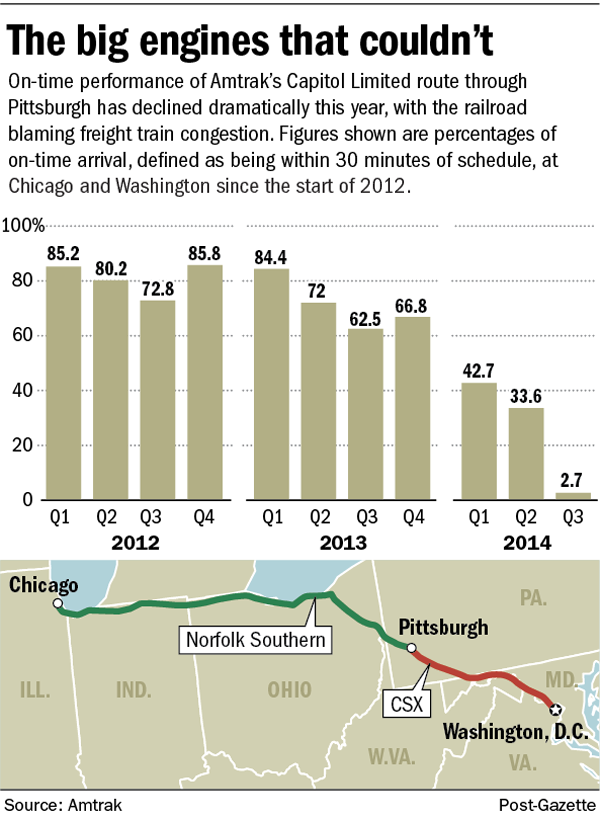 Amtrak has formally complained to the Surface Transportation Board that the two freight railroads over whose tracks the Capitol Limited operates — the Norfolk Southern and CSX — are not giving preference to the Amtrak train as the law requires. According to the statute, Amtrak can only make a formal complaint if a train’s on-time record falls below 80% for two consecutive quarters. Eighty percent? How does 27.8% and 20.4% sound? That’s the on-time performance average for all stations served by the Capitol Limited for the third quarter of this year. (Click on the graph to enlarge.)
Of course, those numbers take into consideration cities and towns that come early in the train’s schedule. Clearly, the westbound Capitol Limited will have a much better on-time record at Harpers Ferry, 55 miles into the route, than it will 500 miles farther on at Toledo.
OK … so bearing in mind that any arrival that’s 30 minutes late or less is considered to be on-time, would you care to guess what the Capitol Limited’s on-time arrival score was for the third quarter of this year at the two terminal stations? Would you believe 2.7? That’s two-point-freakin’-seven-per-cent!
Amtrak’s complaining to the federal authorities? Well, it’s about damn time!