Jim Loomis August 03, 2014 Amtrak, Canada, Most Scenic Train Rides, Train Travel Advice, United States 2 Comments
(The following is Part 2 of an account of one of my several trips on the Cardinal. It was originally published in the Columbus Dispatch.)

At dinner, I’m seated with a husband and wife from Philadelphia on their way to visit a daughter in Portland, Oregon. They’ll be connecting with the Empire Builder tomorrow in Chicago. That’s a two-night trip, so they’ll be spending a total of three nights on the train. “My wife wasn’t sure about it,” says the man, “so we made a deal: I get the upper berths.”

My bed has been made up by the time I return to my roomette. I climb in and start a paperback thriller, but drift off to sleep just as the Cardinal comes to a stop at Huntington, West Virginia.

We’re in farm country when I awaken the next morning, a thick mist blanketing and softening the landscape. Soon, tidy farm houses set among broad fields recently planted with corn or soybeans give way to towns, then suburbs, and finally to the industrial outskirts of Indianapolis. But it’s now 7:30, and we should have been here almost three hours ago.

A few minutes later over breakfast in the dining car, a conductor explains that there was a medical emergency last night. Back in Huntington, as I was blissfully falling asleep, a passenger who had complained of chest pains was examined by paramedics, removed from the train and taken to a local hospital. Then, says the conductor wearily, we were ordered to travel at reduced speed through much of Kentucky because of flash flood warnings. Checking his pocket watch, he confirms we’re three hours behind schedule. 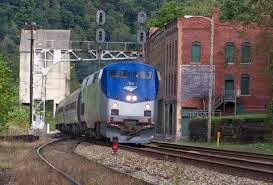 An older couple at an adjacent table reacts with alarm at this news. They’re connecting with the California Zephyr, scheduled to leave Chicago at 2:00 p.m. Assuming no further delays, we’ll arrive with but a scant half hour to spare.
Just a few minutes from Lafayette, Indiana, the Cardinal slows and the clickety-clack of the wheels take on a deeper, hollow sound as we roll onto a bridge over the Wabash River. Several dozen Canada geese are waddling around on the far bank.
There’s another short delay as the train slows for a Union Pacific crew working on the tracks, but the Chicago skyline is there in the distance now, and at 1:41 p.m., the Cardinal finally settles to a stop in Chicago’s Union Station. This is home for many of the passengers, but others among us are here to connect with one of three other Amtrak trains heading west. We’ve arrived almost three hours behind schedule, but we’ll all make our trains.
Just inside the terminal, I say good-bye to the couple from Philadelphia who will soon be on the Empire Builder heading for Seattle. “Well, we’re going to make our connection all right,” says the husband, “We’ve got Montana and the Rockies and two more nights aboard to look forward to.”
“Just remember,” his wife says, “You’ve got the upper berth.”