Who Was the First Tourist to Visit Hawaii?

Jim Loomis May 18, 2014 Hawaii, Tahiti 0 Comment
True or False: the Hawaiian Islands were first discovered in 1778 by English navigator/explorer, Captain James Cook.
True, you say? Sorry, for that statement to be true, it must be amended to say that Captain Cook was the first Europeanto discover these islands. 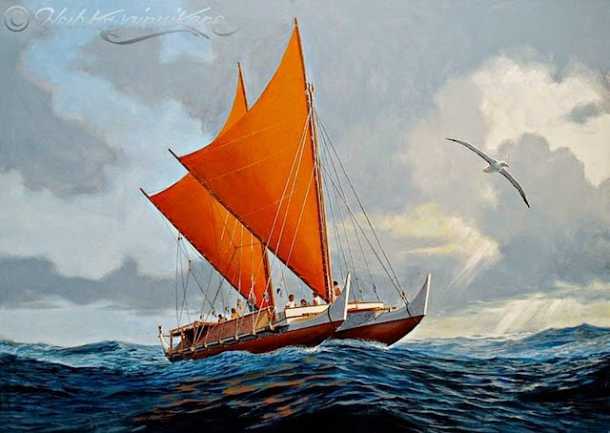 In fact, the very first people to settle here arrived about a thousand years before Cook. They were Polynesians coming from what is now Tahiti or the Marquesas Islands. Theirs was essentially a stone-age society – no nails, no wire, no metal of any kind. And they traveled across more than 2,000 miles of open ocean in double-hulled sailing canoes held together with hand-braided ropes of grass and vines.

Furthermore, they traveled back and forth, bringing their families and plants and animals – pigs and dogs. And the truly amazing thing is that they could find these tiny dots in the middle of the vast Pacific Ocean with no modern navigational aids … not even a simple compass.  Eventually, they navigated by the stars, but on those early voyages, traveling from the southern hemisphere across the equator into the northern hemisphere, the stars were all different … all unfamiliar. Truly, a strong case can be made that those people in those canoes should be given credit for the greatest feat of navigation . . . ever!
Almost 40 years ago, the Polynesian Voyaging Society was formed and the Hokule’a was built … a replica of one of those ancient voyaging canoes. And, with no modern navigational equipment, with a crew of young Hawaiians  led by young Nainoa Thompson, the Hokule’a sailed south to Tahiti, to other islands in French Polynesia, and to the Marquesas.
And today, once again led by Master Navigator Thompson, the Hokule’a and a sister vessel, Hikianalia, as an escort, set out on a three-year voyage that will take them around the world … to 26 countries … covering more than 50,000 miles. First stop after leaving Hawaii: Tahiti. They’re calling their journey Malama Honua which means “Take Care of the Earth.”
And it’s impossible to convey just how damn proud we all are.