Not All Amtrak Paperwork Is Created Equal.

Jim Loomis May 10, 2014 Amtrak, Long-Distance Trains, Pacific Parlour Car 5 Comments
I’ve often been told that on Amtrak trains, good onboard service crews kind of evolve … and that does make sense: Good employees, whether car attendants or dining car staff, work well together and pitch in when things get extra busy or when things go wrong … as, for instance, when a member of the dining car staff gets sick in the middle of a trip and one of the car attendants grabs a tray and starts bussing tables to pick up some of the slack. It’s just natural for people like that to want to work together.
According to this theory, that is also how the other kind of employees end up together in the same crew. I had one of those crews today. 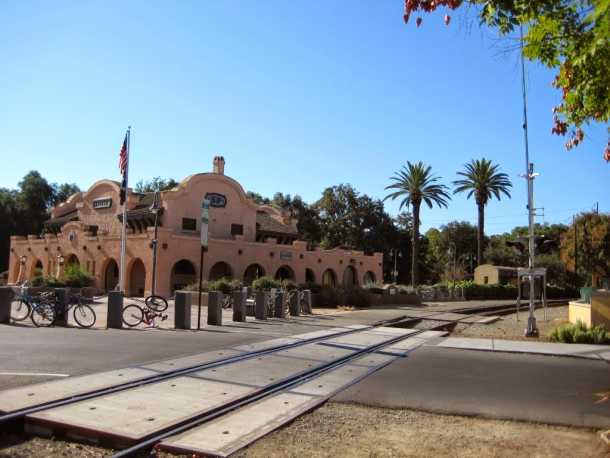 My first glimmer comes as the Coast Starlight pulls into Davis, California. It’s Saturday morning at 6:55. I’m the only passenger standing on the platform where the sleeping cars should stop and, sure enough, car 531 stops almost right in front of me. The door opens and the car attendant steps out and greets me, then thoughtfully steps back so as not to be in the way when I lift my suitcase and carry-on bag into the Superliner and drag them up the narrow stairway and into roomette #2. Not a good sign.

Thirty minutes later, I encounter Trisha, the LSA or Lead Service Attendant in Train 11’s dining car. A slight young woman of perhaps 30, Trisha appears to be having a bad day as she impatiently instructs people where to sit. He demeanor is not, shall we say, welcoming.

I’m seated at a table with a couple from Ohio and a young man from China who has just been hired by Facebook. After several minutes, our server, Dana, appears. Tall, sixty-ish, and formidable, she slaps chits onto the table and directs us to sign at the bottom and fill our room and car numbers. Throughout the meal Dana appears rushed and distracted. Handing me my order of French Toast, she barks “Here’s yours”, then adds “my dear” almost as a afterthought. It doesn’t help.
Breakfast over, I relax in the Pacific Parlour Car, chatting with a man named Steve, who works for a community college in Seattle. After about an hour, I return to my sleeping car where, piled on top of the trash receptacle in the middle of the car, is a stack of newspapers. It’s the Sacramento Bee, which means they had been put aboard the train when the Coast Starlight stopped in California’s capital city four hours earlier. A conscientious Amtrak car attendant — and most of them are that and more —  would have long since slipped those newspapers under the door of each occupied compartment. As I pass by Bedroom A, I catch a glimpse of our car attendant. He’s stretched out on the chair and he’s texting.
That was to be my only glimpse of the man until we reached Los Angeles at the end of my 14-hour journey. As I was hauling my luggage off the rack and out onto the platform, he smiled. “Thanks for traveling with us today,” he said.
I smiled right back at him. Because, as a member of the board of directors of the National Association of Railroad Passengers, I get to fill out and submit an official Amtrak Trip Report whenever I travel on one of their long-distance trains. And I can hardly wait.

Previous Chicago to Davis on Amtrak’s California Zephyr
NextAmtrak Food Service: Down and Down It Goes. And Where It Stops, Nobody Knows.