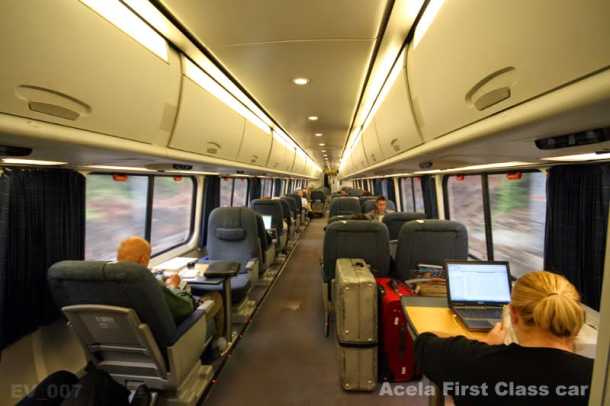 The severe storms that have been hammering the east coast over the past several days disrupted a lot of travel plans. Many of the people attending the NARP meetings in Washington had trouble getting there … and leaving, too.
I was booked in first class on an Acela scheduled to leave Washington’s Union Station yesterday. The original plan was to get off in New York, have a quick meeting with Janet Rosen, my literary agent, then catch one of the Northeast Regional trains to New London, Connecticut, where I would have a dinner with Rod Johnstone and his wife. Rod is an old classmate of mine and is the designer of the justly famous J-Boats.
Ah, but it was not to be. Trains heading north out of Washington were delayed because up near Baltimore the storm had blown down trees which had fallen on the catenary — the overhead wires from which these trains draw their power.
By the time we left, I would not only miss my appointment with Janet in New York, but would not get to Penn Station in time to catch the train to New London.
I did have a brief flash of inspiration: If I just stayed on the Acela and got off at New London, I could still make my diner with Rod and his wife.  Alas, it was a good idea in theory, but that particular train did not stop at New London. It was going all the way to Boston, however, and that was my ultimate destination.
But here’s the point to this lengthy explanation: There I was, sitting in the first class car on an Acela, but holding a ticket that had me riding coach on one of the regular Northeast Regional trains from there to New London and coach again on to Boston. The car attendant had seen my ticket and knew what had happened. He said it made sense for me just to keep my first class seat on the Acela all the way to Boston. Of course it did … but there are many car attendants who would have played it by the book and politely ushered me off the train in New York. Not this guy. He knew that travel had been disrupted all over the east coast and letting me stay on his train was the common sense solution to my particular needs.
I offered to pay the difference, but he waved that off, saying it would be too complicated to figure it all out and he was too busy taking care of the people in the car anyway. And — Oh, by the way — would I care for another glass of merlot?

Previous DANGER! Fire Department at Work!
NextIt’s Not What You Know, It’s Who You Know.