Jim Loomis March 01, 2014 Amtrak, Long-Distance Trains 1 Comment
The Empire Builder is Amtrak’s most popular long-distance train, operating daily in each direction between Chicago in the east and both Portland and Seattle on the West Coast.
To refresh memories, because of bad weather and terrible congestion caused by four or five times as many freight trains as has been normal, the Empire Builder has had an absolutely horrendous on time record for several months.
It got so bad that about a month ago, at the behest of BNSF, the host railroad, Amtrak actually began transporting passengers by bus between Devil’s Lake and Minot, thus bypassing much of the area in North Dakota where all those new oil fields are. 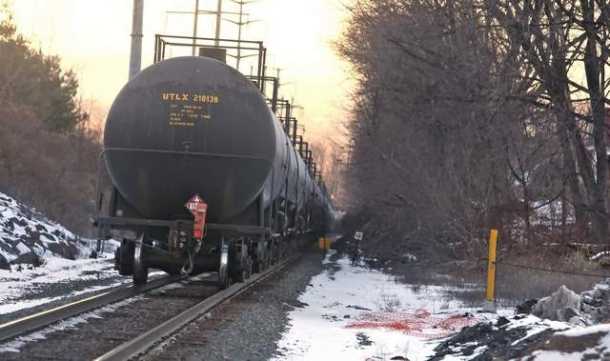 That’s the problem, you see. All that crude oil is being shipped to refineries in great long trains consisting of nothing but tanker cars. Lots and lots of trains. And, just to be sure that everyone is aware, I need to mention that the movement of all rail traffic, including Amtrak trains, is controlled by dispatchers who are employees of the host railroad, in this case BNSF.
Anyway, BNSF has said that Amtrak would be back on their normal route as of today, March 1st, so I just went to the NARP web site where you can find out which Amtrak trains are running late, by how much, and where they lost the time.
Here’s what I found:
The westbound Empire Builder lost almost four hours just between Devil’s Lake and Minot …a distance of 120 miles.
The eastbound train left Wolf Point, Montana on time; by the time it reached Minneapolis/St. Paul, a distance of 750 miles, it was seven hours, 53 minutes late.
It sure looks like all that crude oil is still being given priority over all those people.

Previous Selling Passenger Rail: How Can You Ying If the Other Guy Yangs?
NextWhen It Comes to Train Travel, Planning Is Half the Fun.